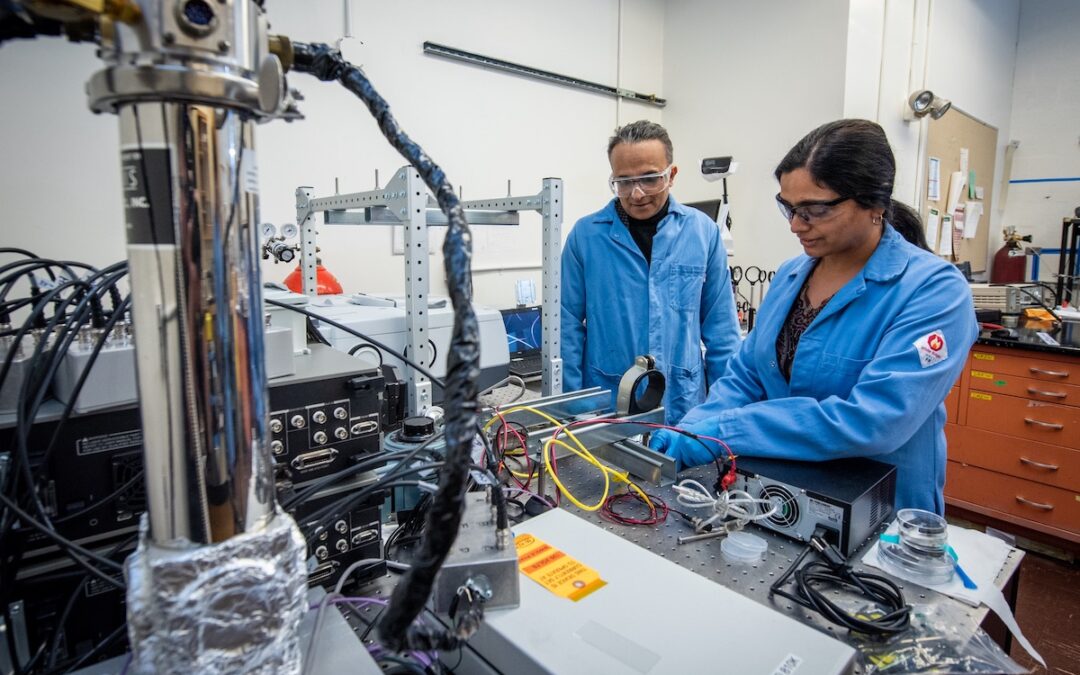 Could a tank of ice or hot water be a battery? Yes! If a battery is a device for storing energy, then storing hot or cold water to power a building’s heating or air-conditioning system is a different type of energy storage. Known as thermal energy storage, the technology has been around for a long time but has often been overlooked. Now scientists at Lawrence Berkeley National Laboratory (Berkeley Lab) are making a concerted push to take thermal energy storage to the next level.

To overcome some of the limitations of traditional water-based thermal energy storage, Berkeley Lab scientists are looking at developing next-generation materials and systems to be used as a heating or cooling medium. They are also creating a framework to analyze costs as well as a tool to compare cost savings. In a series of papers published this year, Berkeley Lab researchers have reported important advances in each of these areas.

“It is very challenging to decarbonize buildings, particularly for heating,” said Ravi Prasher, Berkeley Lab’s Associate Lab Director for Energy Technologies. “But if you store energy in the form of the end use, which is heat, rather than in the form of the energy supply, which is electricity, the cost savings could be very compelling. And now with the framework we’ve developed, we’ll be able to weigh the costs of thermal energy storage versus electrical storage, such as with lithium batteries, which has been impossible until now.”

In the United States, buildings account for 40% of total energy consumption. Of that, almost half goes toward thermal loads, which includes space heating and cooling as well as water heating and refrigeration. In other words, one-fifth of all energy produced goes towards thermal loads in buildings. And by 2050, the demand on the electricity grid from thermal loads is expected to increase dramatically as natural gas is phased out and heating is increasingly powered by electricity.

As our society continues to electrify, the need for batteries to store energy is projected to be huge, reaching to an estimated 2 to 10 terawatt-hours (TWh) of annual battery production by 2030 from less than 0.5 TWh today. With the lithium-ion battery as the dominant storage technology for the foreseeable future, a key constraint is the limited availability of raw materials, including lithium, cobalt, and nickel, essential ingredients of today’s lithium battery. Although Berkeley Lab is actively working to address this constraint, alternative forms of energy storage are also needed.

“Lithium batteries face tremendous pressure now in terms of raw material supply,” Prasher said. “We believe thermal energy storage can be a viable, sustainable, and cost-effective alternative to other forms of energy storage.”

Thermal energy storage can be deployed at a range of scales, including in individual buildings – such as in your home, office, or factory – or at the district or regional level. While the most common form of thermal energy uses large tanks of hot or cold water, there are other types of so-called sensible heat storage, such as using sand or rocks to store thermal energy. However, these approaches require large amounts of space, which limit their suitability for residences.

From liquid to solid and back again

To get around this constraint, scientists have developed high-tech materials to store thermal energy. For example, phase-change materials absorb and release energy when transitioning between phases, such as from liquid to solid and back.

Phase-change materials have a number of potential applications, including thermal management of batteries (to prevent them from getting too hot or too cold), advanced textiles (think of clothing that can automatically keep you warm or cool, thus achieving thermal comfort while reducing building energy consumption), and dry cooling of power plants (to conserve water). In buildings, phase-change materials could be added to walls, acting like a thermal battery for the building. When the ambient temperature rises above the material’s melting point, the material changes phase and absorbs heat, thus cooling the building. Conversely, when the temperature drops below the melting point, the material changes phase and releases heat.

However, one problem with phase-change materials is that they typically work only in one temperature range. That means two different materials would be needed for summer and winter, which increases the cost. Berkeley Lab set out to overcome this problem and achieve what is called “dynamic tunability” of the transition temperature.

Shown are two different ways of integrating thermal energy storage in buildings. A thermal battery (powered by a phase-change material) can be connected to a building’s heat pump or traditional HVAC system (left), or the phase-change material can be incorporated inside walls. (Credit: Berkeley Lab)

“This new technology is truly unique because it combines thermal and electric energy into one device,” said Applied Energy Materials Group Leader Gao Liu, co-corresponding author of the study. “It functions like a thermal and electric battery. What’s more, this capability increases the thermal storage potential because of the ability to tune the melting point of the material depending on different ambient temperatures. This will significantly increase the utilization of phase-change materials.”

Kaur, also a co-author on the paper, added: “In the bigger picture, this helps bring down the cost of storage because now the same material can be utilized year round instead of just half the year.”

In large-scale building construction, this combined thermal and electrical energy storage capability would allow the material to store excess electricity produced by on-site solar or wind operations, to meet both thermal (heating and cooling) and electrical needs.

Another Berkeley Lab study earlier this year addressed the problem of supercooling, which is super not cool in certain phase-change materials because it makes the material unpredictable, in that it may not change phase at the same temperature every time. Led by Berkeley Lab graduate student assistant and UC Berkeley PhD student Drew Lilley, the study, published in the journal Applied Energy, was the first to demonstrate a methodology to quantitatively predict the supercooling performance of a material.

A third Berkeley Lab study, published in Applied Physics Letters this year, describes a way to develop atomic- and molecular-scale understanding of phase-change, which is critical for the design of new phase-change materials.

A fourth study, just published in Energy & Environmental Science, develops a framework that will allow direct cost comparisons between batteries and thermal energy storage, which had not been possible until now.

“This is a really good framework for people to compare – apples-to-apples – batteries versus thermal storage,” Kaur said. “If someone came to me and asked, ‘should I install a Powerwall (Tesla’s lithium battery system to store solar energy) or thermal energy storage,’ there was no way to compare them. This framework provides a way for people to understand the cost of storage over the years.”

The framework, which was developed with researchers at the National Renewable Energy Laboratory and Oak Ridge National Laboratory, takes into account lifetime costs. For example, thermal systems have lower capital costs to install, and the lifetime of thermal systems is typically 15 to 20 years, whereas batteries typically have to be replaced after eight years.

Finally, a study with researchers from UC Davis and UC Berkeley demonstrated the techno-economic feasibility of deploying HVAC systems with thermal energy storage based on phase-change materials. First the team developed simulation models and tools needed to assess the energy cost savings, peak load reduction, and cost of such a system. The tool, which will be available to the public, will allow researchers and builders to compare system economics of HVAC systems with thermal energy storage to all-electric HVAC systems with and without electrochemical storage.

“These tools offer an unprecedented opportunity to explore the economics of real-world applications of thermal energy storage-integrated HVAC,” said Berkeley Lab project lead Spencer Dutton. “Integrating thermal energy storage allows us to significantly reduce the capacity and hence cost of the heat pump, which is a significant factor in driving down lifecycle costs.”

Next, the team went on to develop a “field-ready” prototype HVAC system for small commercial buildings that employed both cold and hot thermal batteries based on phase-change materials. Such a system shifts both cooling and heating loads off the electric grid. Finally, the team is deploying a residential-scale field demonstration, focusing on home electrification and shifting home heating and hot water loads.

The research was supported by Buildings Technology Office of the Department of Energy’s Office of Energy Efficiency and Renewable Energy.