This LEGO Air Conditioner is Cooler Than Yours 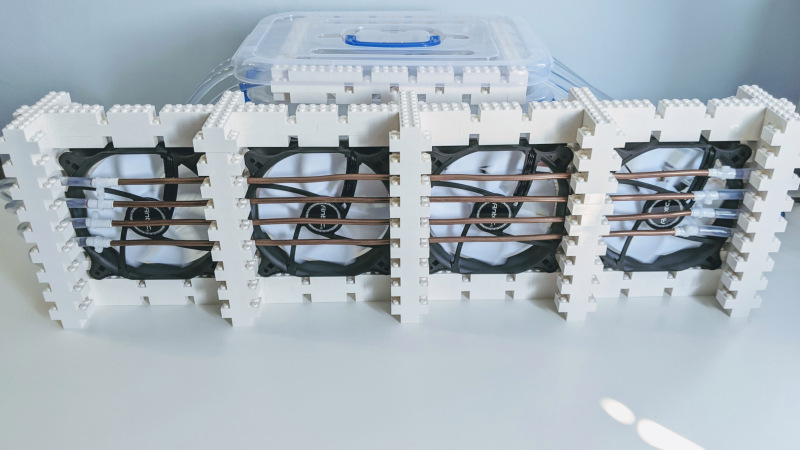 What’s the coolest thing a person can build with LEGO? Well it’s gotta be an air conditioner, right? Technically, Manoj Nathwani built a LEGO-fied swamp cooler, but it’s been too hot in London to argue the difference.

This thoroughly modular design uses an Arduino Uno and a relay module to drive four submersible pumps. The pumps are mounted on a LEGO base and sunk into a tub filled with water and ice packs. In the middle of the water lines are lengths of copper tubing that carry it past four 120mm PC case fans to spread the coolness. It works well, it’s quiet, and it was cheap to build. Doesn’t get much cooler than that.

Manoj had to do a bit of clever coupling to keep the tubing transitions from leaking. All it took was a bit of electrical tape to add girth to the copper tubes, and a zip tie used as a little hose clamp.

We think the LEGO part of this build looks great. Manoj says they did it by the seat of their pants, and lucked out because the copper and plastic tubing both route perfectly through the space of a 1x1x1 brick.

DIY cooling can take many forms. It really just depends what kind of building blocks you have at your disposal. We’ve even seen an A/C built from a water heater.