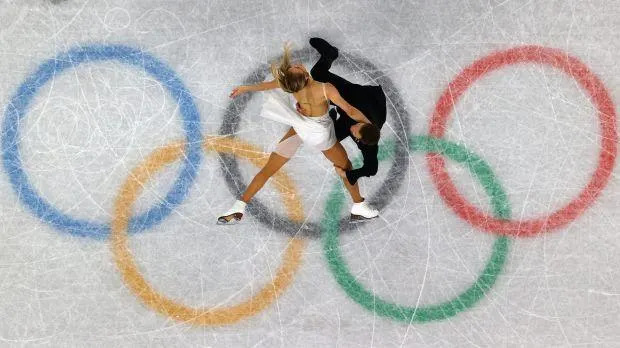 For the first time, Olympic skaters, hockey players, and curlers will be gliding across ice made using natural refrigerants rather than synthetic chemicals that emit F-gases, greenhouse gases that are thousands of times more potent at warming the atmosphere than CO2.

According to the International Olympic Committee, the natural refrigeration systems will save 26 million kilograms (57 million pounds) in greenhouse gas emissions, the equivalent of what 3,900 cars would produce in a year.

Natural refrigerants are lower-emission alternatives to hydroflurocarbons—the synthetic chemicals now used in most industrial cooling systems, air conditioners and refrigerators. For five of the nine ice rinks at the Beijing Olympics, the natural refrigerant is CO2. (This is the same gas responsible for warming the atmosphere, but its harmful emissions are low when it circulates internally in a cooling system, as opposed to when it is released into the air in the process of burning gasoline in a combustion engine.)

The technology helps lower the Beijing Olympics’ overall carbon emissions, and moves China closer to its goal of holding a carbon-neutral event.

The use of natural refrigerants at the high-profile event “has the potential to have a really positive impact,” said Fionnuala Walravens, a campaigner at the London-based Environmental Investigation Agency (EIA).

“The Olympics is all about setting legacies and creating systems that we want to be proud of going forward,” Walravens said. “And it’s really proof that these are the future.”

Potent greenhouse gases that dissipate in decades, not centuries

The typical household fridge or air-conditioner relies on a family of synthetic refrigerants known as F-gases, short for fluorinated gases. These are potent greenhouse gases, including hydrofluorocarbons (HFCs) and hydrochlorofluorocarbons (HCFCs).

CFCs, found in the hairsprays of the 1980s, are also in the family. Though banned decades ago, existing stock are still leaking into the atmosphere.

The potential of these gases to warm the climate varies, and is measured by a metric called Global Warming Potential (GWP), which compares the warming potency of a given greenhouse gas to carbon dioxide over a particular period of time.

For example, HCFC-22, a refrigerant in air conditioners and the most widely-used in the market, has a 20-year GWP of 5,160. That is, over the course of 20 years, a ton of HCFC-22 emissions traps 5,160 times as much heat as a ton of CO2. HFC-23, a byproduct of producing HCFC-22, and used for other applications like cleaning for the semiconductor industry and very low-temperature refrigeration, has a GWP of 14,800. (CO2 is set as the basis of comparison with a GWP of 1.)

Ammonia, another natural refrigerant, meanwhile, has a GWP of 0.

In 2020, F-gases made up 2.1% of greenhouse gasses (GHGs), according to the World Resources Institute, a Washington, DC-based research organization.

But as a warming world requires more cooling, air conditioner use is expected to go up. EIA estimates that the global stock of air conditioners will triple to 5.6 billion (pdf) by 2050. Without a meaningful shift to natural refrigerants, Walravens says, F-gases could make up 13% of GHGs by 2030, making the world hotter as they cool our rooms.

Unlike CO2, which stays in the atmosphere for centuries, many F-gases dissipate in about 20 years. So replacing supermarket cooling systems, commercial and home air-conditioners, refrigerators, and yes, ice rinks, would lead to a drop in greenhouse gases in two decades. This combination of high potency and a relatively short lifespan, means, “It’s a near-term climate win,” Walravens said. “Reducing their emissions has a really rapid effect on reducing global warming.”

Are natural refrigerants available on the market?

Air-conditioners and refrigerators for home use that use natural refrigerants are available on the market, though regulations differ in each country. Many supermarkets, in Europe, the US, and elsewhere have either switched out their cooling systems or constructed new buildings fitted for natural refrigerants.

Despite the availability of the solutions, Walravens says producers of the equipment are not making enough of these air-conditioners and refrigerators—in part because of the low public awareness on the climate impact of refrigeration. With little public pressure, the chemical companies that make hydroflurocarbons have little incentive to transition cooling appliances and systems to become more sustainable.

Countries are moving toward regulating HFCs. The US signed a law last year to phase down the supply of HFCs by 85% in 15 years. On Jan. 1, 2022, China, the world’s largest producer and exporter of HFCs, froze new production capacity for the five most widely-used HFCs.

In the last couple of years, Walravens has begun to see the awareness change. “People’s understanding and attention on climate change is much bigger now,” she said. “There’s much more interest and scope for people to take it in, which is quite exciting. Having done this for 12 years, it’s like, finally, people are listening.”