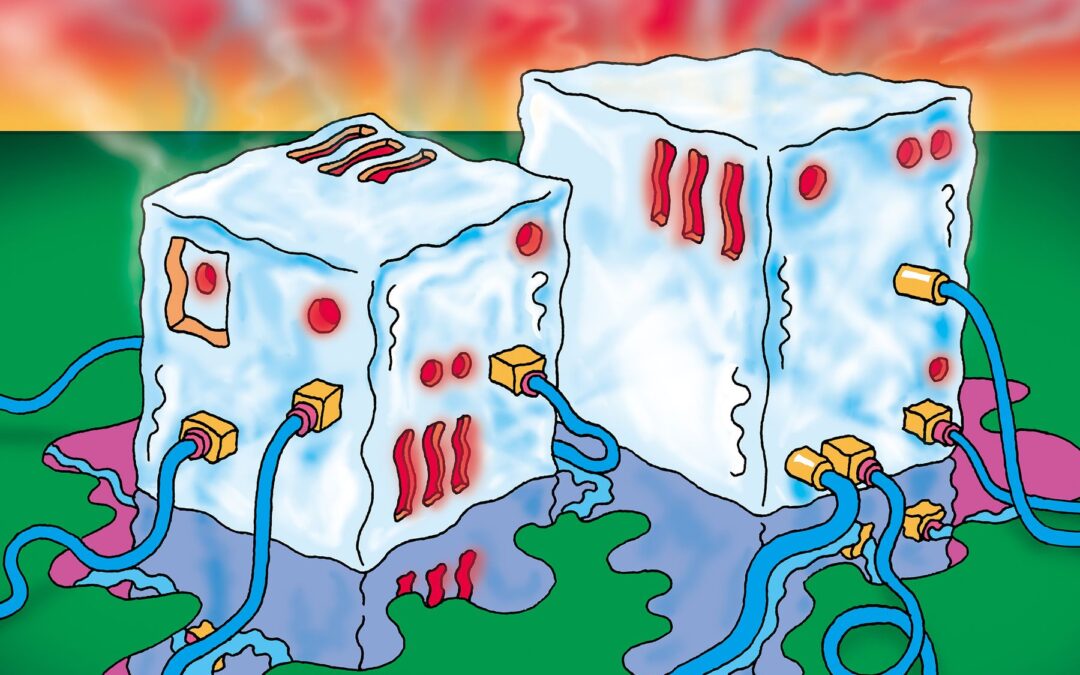 All those videos, emails, bank statements, photos, shopping carts, airline reservations, and so, so, so much more sluicing around the internet eventually end up in the millions of data centers scattered across the globe. With all that stuff coming and going, those places are getting crowded—and hot. David Craig can’t do much about the congestion, but he says he’s got a fix for the heat: A liquid that bathes the cores of processors to keep things at a relatively chilly 50 degrees Celsius (122 Fahrenheit). “As we process much more data, the chips are becoming three, four, five times hotter,” says Craig, chief executive officer of Iceotope Technologies Ltd., a U.K. startup focused on cooling strategies for computing.

Data centers consume 2% to 4% of the world’s electricity, and almost half of that power goes to cooling, according to the Uptime Institute, a consulting firm in Seattle. Early on, most data was kept on-site at the banks, universities, or corporations that generated it, where cooling often meant little more than opening the window. Today, a growing share of the world’s data is consolidated in megacenters with thousands of processors, and the vast majority of them use traditional air conditioning. While some heat is good for computers, too much can cause systems to crash, and with each generation of computer chips running faster and hotter, the systems will soon be too hot for even the most efficient air conditioner. Finding better ways to keep temperatures down could save the industry some $10 billion a year on electricity alone, according to Uptime. “Air just isn’t a very effective medium for transferring heat,” says Rabih Bashroush, global head of IT advisory services at Uptime.

The market for equipment used to cool computer gear hit $10.5 billion in 2019 and is growing 13% a year, according to Allied Market Research, sparking a race among companies ranging from startups such as Iceotope to the likes of Facebook, Google, and Microsoft. Newer strategies focus mostly on liquid technologies, including circulating specially formulated fluids through tubes, submerging processors in the stuff, and even building data centers under the sea. Market researcher PitchBook reports that venture capital investment in data-center-cooling startups more than doubled last year, to $34 million. “Liquid cooling can provide more service in less space,” says Arman Shehabi, a research scientist at Lawrence Berkeley National Laboratory who studies power consumption in computers.

Microsoft Corp., which runs more than 200 data centers globally, is testing systems in which servers are bathed directly in a fluid that doesn’t conduct electricity. It estimates liquid cooling could allow it to fit 10 times as much computing power in the same space. “We’re just starting down the liquid path,” says Christian Belady, chief of the unit that develops technology for data centers. “You’re going to see a lot of rapid change in how we do things.”

At least a dozen smaller startups have joined the fray. Spain’s Submer Technologies SL sells sealed pods that are filled with servers bathed in a nonconducting liquid and can be plugged directly into a network. The company says the excess heat can be used to warm nearby buildings, and the technology extends the life of the computer because no dust reaches the processor. Netherlands-based Incooling BV uses a fluid that gets boiled into a gas by the processors before being cooled back into a liquid and recirculated, which the company argues is the most efficient way to absorb heat. “We’re able to maximize the potential of every component,” says co-founder Helena Samodurova.

Iceotope, based in Sheffield, a three-hour drive north of London, has raised more than $10 million from venture capital backers since its founding in 2005. It initially sought to manufacture its own cooling systems, but about five years ago it shifted to developing the underlying technology. Iceotope is raising another round of funding from strategic investors that it expects will give it better entrée to more customers, and last year it opened an office in the U.S., aiming to expand its business there. Although the company had less than £10 million ($14 million) in 2020 sales, Craig says he aims to at least double revenue this year as partnerships with computer manufacturer Lenovo Group Ltd. and some smaller companies start to bear fruit. “The market is getting hot, fast—no pun intended,” he says. “If we don’t deal with cooling efficiently, we’ll be in real trouble.”

BOTTOM LINE – Data centers consume as much as 4% of global electricity, almost half of that for cooling. Better ways to keep temperatures down could save the industry $10 billion a year.