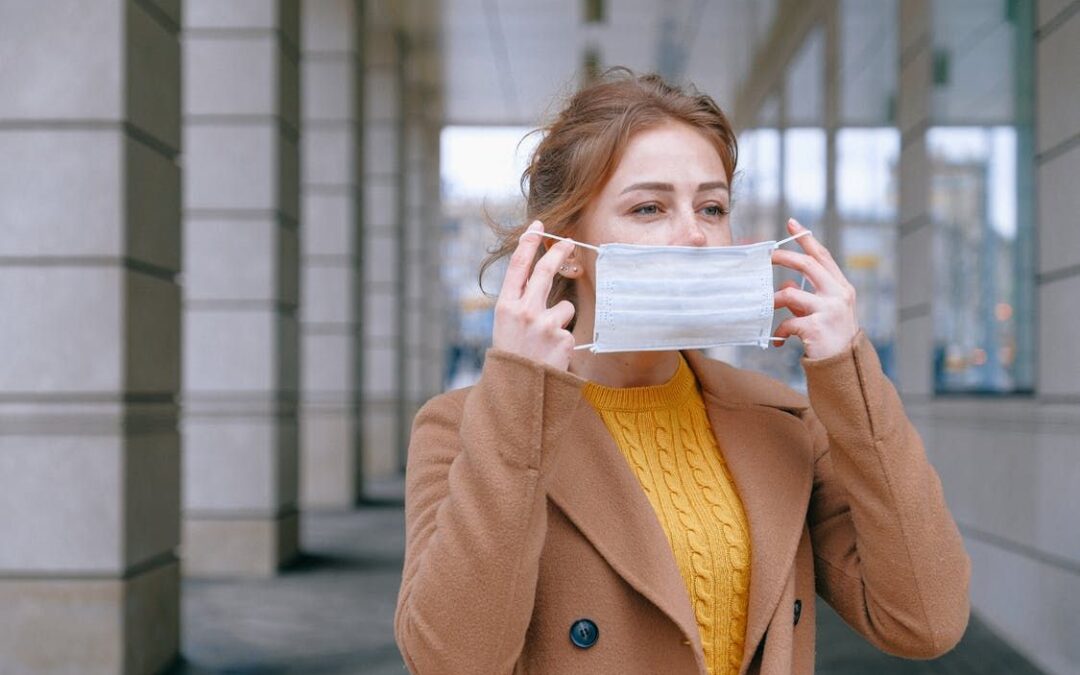 The principal mode by which people are infected with SARS-CoV-2 (the virus that causes COVID-19) is through exposure to respiratory droplets carrying infectious virus.

Respiratory droplets are produced during exhalation (e.g., breathing, speaking, singing, coughing, sneezing) and span a wide spectrum of sizes that may be divided into two basic categories based on how long they can remain suspended in the air:

Once respiratory droplets are exhaled and as they move outward from the source, their concentration decreases through fallout from the air (largest droplets first, smaller later) combined with dilution of the remaining smaller droplets and particles into the growing volume of air they encounter.

These modes of transmission are not mutually exclusive. For instance, “close contact” refers to transmission that can happen by either contact or droplet transmission while a person is within about 6 feet of an infected person.

Aerosol has been used both to define respiratory droplets of a certain size (e.g., smaller droplets and particles), as well as to describe the collection or cloud of these respiratory droplets in the air. In the healthcare setting, aerosol is used with respect to “aerosol-generating procedures” (e.g., intubation, bronchoscopy) that produce small droplets and particles and require distinct engineering controls to prevent occupational transmission of infectious pathogens like SARS-CoV-2. In community settings, aerosol was the term used to describe the sewage system-generated cloud of small droplets and particles that was believed to have spread SARS (caused by the virus SARS-CoV-1) during the 2003 Amoy Gardens outbreak in Hong Kong.

Airborne can be used to describe any size particle (e.g., droplet, dust, pollen) capable of travel through the air. For respiratory droplets, that can include droplets that are close to the source and those that have moved farther away. However, most infectious disease and public health experts reserve the term airborne specifically for use in the context of airborne transmission to describe infections capable of being transmitted through exposure to infectious, pathogen-containing, small droplets and particles suspended in the air over long distances and that persist in the air for long times.

Airborne transmission is not equally efficient for all respiratory microbes

For some viruses and bacteria, airborne transmission is a highly efficient mode for spreading infection. Examples include Mycobacterium tuberculosis (the bacterium that causes tuberculosis), rubeola (the virus that causes measles), and varicella-zoster (the virus that causes chicken pox). Although these infections can be transmitted at close range, they are also efficiently and frequently transmitted over longer distances (i.e., more than six feet) or over longer times (i.e., to people passing through an air space in which the infectious person was present minutes to hours earlier). It is especially important to control pathogens that readily infect by means of airborne transmission in healthcare and other occupational settings where special engineering controls are required to prevent spread (e.g., negative-pressure airborne infection isolation rooms, high efficiency respirators).

The epidemiology of SARS-CoV-2 indicates that most infections are spread through close contact, not airborne transmission

Diseases that are spread efficiently through airborne transmission tend to have high attack rates because they can quickly reach and infect many people in a short period of time. We know that a significant proportion of SARS-CoV-2 infections (estimated 40-45%) occur without symptoms and that infection can be spread by people showing no symptoms. Thus, were SARS-CoV-2 spread primarily through airborne transmission like measles, experts would expect to have observed considerably more rapid global spread of infection in early 2020 and higher percentages of prior infection measured by serosurveys. Available data indicate that SARS-CoV-2 has spread more like most other common respiratory viruses, primarily through respiratory droplet transmission within a short range (e.g., less than six feet). There is no evidence of efficient spread (i.e., routine, rapid spread) to people far away or who enter a space hours after an infectious person was there.

Airborne transmission of SARS-CoV-2 can occur under special circumstances

Pathogens that are mainly transmitted through close contact (i.e., contact transmission and droplet transmission) can sometimes also be spread via airborne transmission under special circumstances. There are several well-documented examples in which SARS-CoV-2 appears to have been transmitted over long distances or times. These transmission events appear uncommon and have typically involved the presence of an infectious person producing respiratory droplets for an extended time (>30 minutes to multiple hours) in an enclosed space. Enough virus was present in the space to cause infections in people who were more than 6 feet away or who passed through that space soon after the infectious person had left. Circumstances under which airborne transmission of SARS-CoV-2 appears to have occurred include:

Prevention of COVID-19 by airborne transmission

Existing interventions to prevent the spread of SARS-CoV-2 appear sufficient to address transmission both through close contact and under the special circumstances favorable to potential airborne transmission. Among these interventions, which include social distancing, use of masks in the community, hand hygiene, and surface cleaning and disinfection, ventilation and avoidance of crowded indoor spaces are especially relevant for enclosed spaces, where circumstances can increase the concentration of suspended small droplets and particles carrying infectious virus. At this time, there is no indication of a general community need to use special engineering controls, such as those required to protect against airborne transmission of infections, like measles or tuberculosis, in the healthcare setting.

SARS-CoV-2 is a new virus, and we are still learning about how it behaves.

There are several critical questions that need to be answered to refine guidance for prevention of COVID-19, including