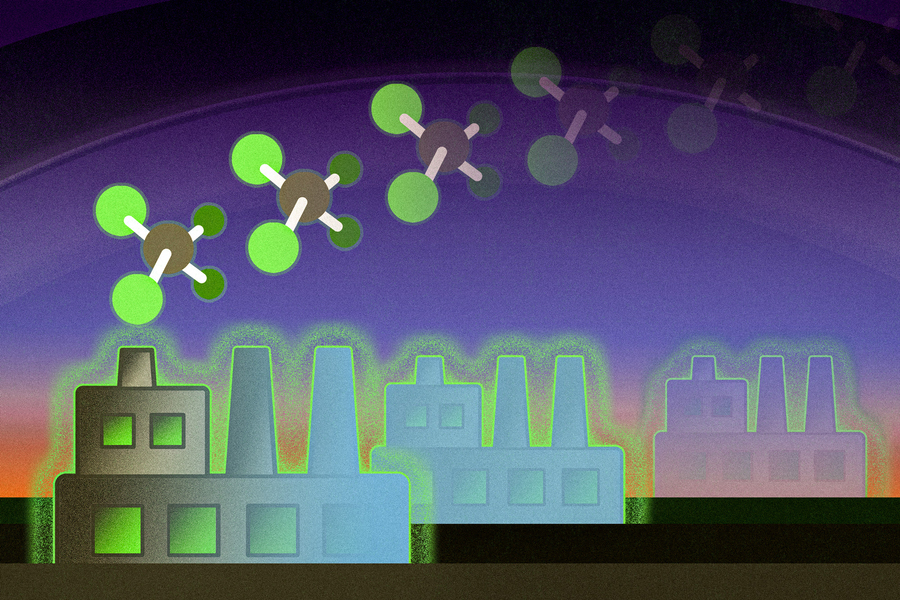 MIT scientists have found that ozone-depleting chlorofluorocarbons, or CFCs, stay in the atmosphere for a shorter amount of time than previously estimated. Their study suggests that CFCs, which were globally phased out in 2010, should be circulating at much lower concentrations than what has recently been measured.

The new results, published today in Nature Communications, imply that new, illegal production of CFCs has likely occurred in recent years. Specifically, the analysis points to new emissions of CFC-11, CFC-12, and CFC-113. These emissions would be in violation of the Montreal Protocol, the international treaty designed to phase out the production and consumption of CFCs and other ozone-damaging chemicals.

The current study’s estimates of new global CFC-11 emissions is higher than what previous studies report. This is also the first study to quantify new global emissions of CFC-12 and CFC-113.

“We find total emissions coming from new production is on the order of 20 gigagrams a year for each of these molecules,” says lead author Megan Lickley, a postdoc in MIT’s Department of Earth, Atmospheric, and Planetary Sciences. “This is higher than what previous scientists suggested for CFC-11, and also identifies likely new emissions of CFC-12 and 113, which previously had been overlooked. Because CFCs are such potent greenhouse gases and destroy the ozone layer, this work has important implications for the health of our planet.”

The study’s co-authors include Sarah Fletcher at Stanford University, Matt Rigby at the University of Bristol, and Susan Solomon, the Lee and Geraldine Martin Professor of Environmental Studies in MIT’s Department of Earth, Atmospheric and Planetary Sciences.

Prior to their global phaseout, CFCs were widely used in the manufacturing of refrigerants, aerosol sprays, chemical solvents, and building insulation. When they are emitted into the atmosphere, the chemicals can loft to the stratosphere, where they interact with ultraviolet light to release chlorine atoms, the potent agents that erode the Earth’s protective ozone.

Today, CFCs are mostly emitted by “banks” — old refrigerators, air conditioners, and insulation that were manufactured before the chemical ban and have since been slowly leaking CFCs into the atmosphere. In a study published last year, Lickley and her colleagues calculated the amount of CFCs still remaining in banks today.

They did so by developing a model that analyzes industry production of CFCs over time, and how quickly various equipment types release CFCs over time, to estimate the amount of CFCs stored in banks. They then incorporated current recommended values for the chemicals’ lifetimes to calculate the concentrations of bank-derived CFCs that should be in the atmosphere over time. Subtracting these bank emissions from total global emissions should yield any unexpected, illegal CFC production. In their new paper, the researchers looked to improve the estimates of CFC lifetimes.

Rather than consider the lifetimes and emissions of each gas separately, as most models do, the team looked at CFC-11, 12, and 113 together, in order to account for similar atmospheric processes that influence their lifetimes (such as winds). These processes have been modeled by seven different chemistry-climate models, each of which provides an estimate of the gas’ atmospheric lifetime over time.

“We begin by assuming the models are all equally likely,” Lickley says. “Then we update how likely each of these models are, based on how well they match observations of CFC concentrations taken from 1979 to 2016.”

After including these chemistry-climate modeled lifetimes into a Bayesian simulation model of production and emissions, the team was able to reduce the uncertainty in their lifetime estimates. They calculated the lifetimes for CFC-11, 12, and 113 to be 49 years, 85 years, and 80 years, respectively, compared with current best values of 52, 100, and 85 years.

“Because our estimates are shorter than current best-recommended values, this implies emissions are likely higher than what best estimates have been,” Lickley says.

To test this idea, the team looked at how the shorter CFC lifetimes would affect estimates of unexpected emissions, particularly between 2014 and 2016. During this period, researchers previously identified a spike in CFC-11 emissions and subsequently traced half of these emissions to eastern China. Scientists have since observed an emissions decrease from this region, indicating that any illegal production there has stopped, though the source of the remaining unexpected emissions is still unknown.

When Lickley and her colleagues updated their estimates of CFC bank emissions and compared them with total global emissions for this three-year period, they found evidence for new, unexpected emissions on the order of 20 gigagrams, or 20 billion grams, for each chemical.

The results suggest that during this period, there was new, illegal production of CFC-11 that was higher than previous estimates, in addition to new production of CFC-12 and 113, which had not been seen before. Together, Lickley estimates that these new CFC emissions are equivalent to the total yearly greenhouse gas emissions emitted by the United Kingdom.

It’s not entirely surprising to find unexpected emissions of CFC-12, as the chemical is often co-produced in manufacturing processes that emit CFC-11. For CFC-113, the chemical’s use is permitted under the Montreal Protocol as a feedstock to make other chemicals. But the team calculates that unexpected emissions of CFC-113 are about 10 times higher than what the treaty currently allows.

“With all three gases, emissions are much lower than what they were at their peak,” Lickley says. “But they’re very potent greenhouse gases. Pound for pound, they’re five to 10,000 times more of a global warming chemical than carbon dioxide. And we’re currently facing a climate crisis where every source of emission that we can reduce will have a lasting impact on the climate system. By targeting these CFCs, we would essentially be reducing some contribution to climate change.”

This research was supported in part by VoLo Foundation.