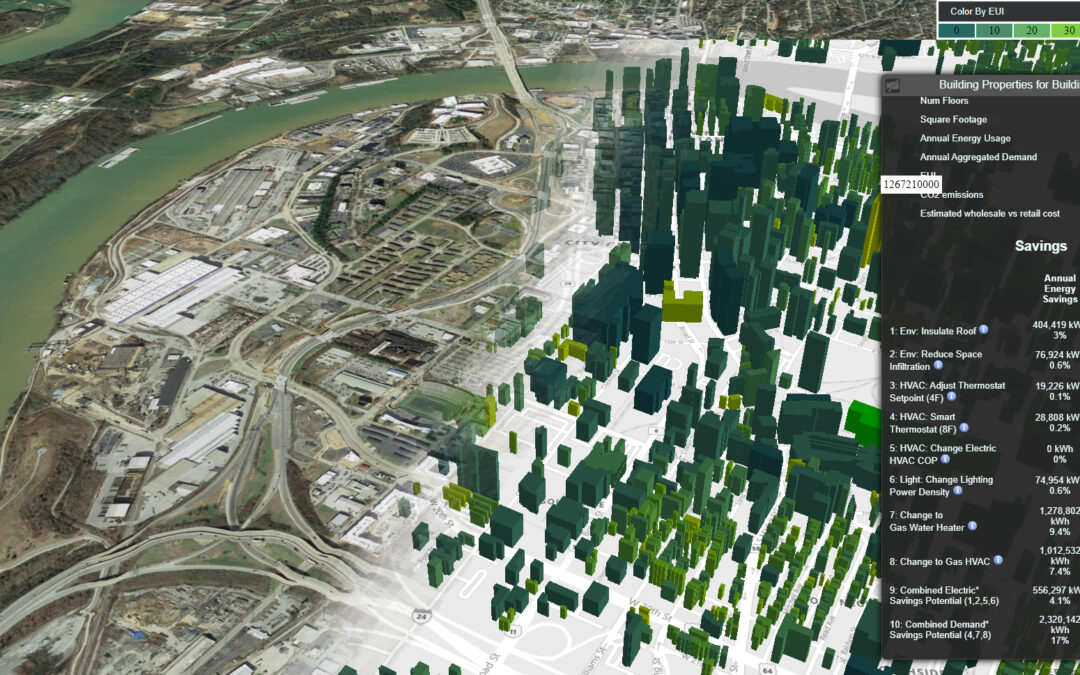 A new tool that simulates the energy profile of every building in America will give homeowners, utilities and companies a quick way to determine energy use and cost-effective retrofits that can reduce energy and carbon emissions.

Researchers at the Department of Energy’s Oak Ridge National Laboratory have developed a modeling program that provides energy details for every one of the 129 million buildings across the United States using publicly available data.

Supported by DOE’s Office of Electricity and Office Energy Efficiency and Renewable Energy, the modeling software suite, known as Automatic Building Energy Modeling, or AutoBEM, was developed to achieve ORNL’s five-year Model America vision: to generate digital twins for all buildings across the country. ORNL’s research team, led by Joshua New, made the models publicly available earlier this year.

“A challenge of this scale is exactly what DOE’s national laboratories were created for, and the tool we’ve developed could be guiding energy-efficient building efforts in this country for decades to come,” said Xin Sun, ORNL associate laboratory director for energy science and technology.

When the project began in 2015, there was no single resource to accurately visualize and quantify energy details for each U.S. building. Such a tool would help the buildings sector contribute to the nation’s goal of spurring an equitable clean energy economy and cement America on a path to net-zero carbon emissions by 2050. This goal is critical because buildings account for 40% of America’s energy consumption and 75% of its electricity.

“There are a lot of different industries that just don’t have the information they need to make actionable business decisions on how to improve energy efficiency,” New said. “AutoBEM is a free resource that’s meant to grease the skids toward deployment.”

Urban planners and energy justice advocates can use AutoBEM to look at entire blocks and neighborhoods and identify areas that have been historically overlooked in building improvement efforts. Doing so would easily identify communities that could most benefit from building upgrades.

“Utilities spend billions of dollars a year on energy efficiency and demand-response programs in the U.S.,” he said. “This spending is based on a signature analysis of electrical profiles. Before this program, no one had the capability to perform that analysis with detailed, building-specific energy modeling at this scale. Individual utilities now have the capability to perform modeling to show the potential of reducing demand and greenhouse gas emissions.”

AutoBEM accesses satellite imagery, street views and other publicly available data that provide insight into a building’s size and energy makeup, such as the number of windows, building envelope materials, number of floors; heating, ventilation and cooling systems, and roof type. The program gathers those inputs using high-performance computing and creates a building energy model to predict which technologies could be deployed to save energy, including solar panels, heat pumps, smart thermostats or energy-efficient water heaters.

“To build AutoBEM, we looked at many of the available data sources and created partnerships with the people that are in the business of generating this data, like satellite, aerial and street view imagery, LiDAR data and other types of databases,” New said. “We had to use or extend algorithms to turn the data into descriptions, creating a 3D footprint of the building with height, the number of windows, the type of building, etc.”

Although AutoBEM can estimate the building’s makeup and energy performance, it doesn’t see details inside of the building.

This project was funded by the Department of Energy Office of Electricity. The research team leveraged supercomputing resources from Argonne’s Leadership Computing Facility.

UT-Battelle manages ORNL for the DOE’s Office of Science, the single largest supporter of basic research in the physical sciences in the United States. The Office of Science is working to address some of the most pressing challenges of our time. For more information, please visit energy.gov/science.