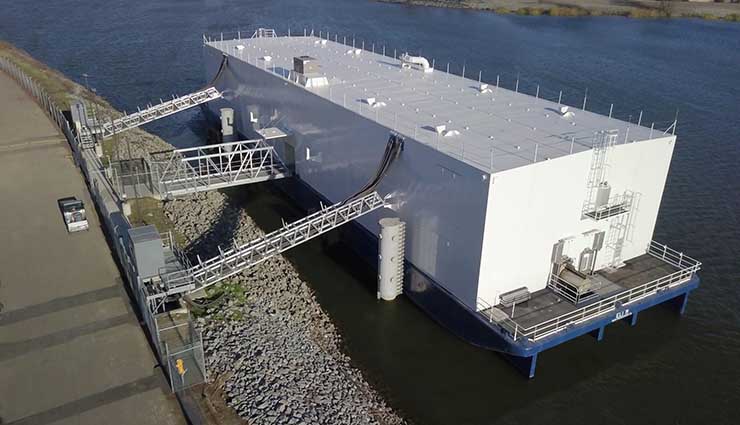 Now that it has launched its first water-based data vessel, Nautilus Data Technologies is moving ashore with a $300 million data center project in Maine that taps a reservoir to create a gravity-fed cooling system for high performance computing.

Nautilus is building its first land-based data center at the former Great Northern Paper Mill in Millinocket, where its 13-acre property has access to 60 megawatts of renewable hydroelectricity from a nearby power plant. The 1,400-acre mill complex was once the largest producer of newsprint in the United States. In repurposing the site for a data center, Nautilus hopes to showcase its vision of converting brownfield sites in hard-hit small towns into centers of digital business.

Nautilus Data Technologies taps rivers, lakes and oceans to slash the cost of cooling servers. Its Maine facility will take advantage of the topography of the Millinocket site, situated between two bodies of water, enabling a gravity-fed design for both supply and discharge water, reducing the need to use energy for pumps. Nautilus says the facility “will be the greenest data center globally.”

“Nautilus is leading the way to a new level of technical and environmental performance in our increasingly data-dependent world,” explains James Connaughton, CEO of Nautilus. “Our advances in digital infrastructure will help deliver outcomes that enhance people’s lives by accelerating social welfare, improving the environmental, and closing the digital divide.”

Nautilus will be the first tenant on the site of the former mill since it closed in 2008. It plans to build a modular facility with the ability to expand in phases, and operate at exceptional levels of energy efficiency. Nautilus and site owner Our Katahdin executed a 99-year lease that allows engineering, permitting, site development, and project financing to immediately begin.

State officials have high hopes for the project. Maine’s governor and both U.S. senators were scheduled to attend today’s groundbreaking in Millinocket, which will kick off site work.

“Nautilus’ new facility will establish Maine as an international leader in environmentally sustainable data storage technology and lay the foundation for future economic growth,” said U.S. Senator Susan Collins, “By breathing new life into the site of the former Great Northern Paper mill, this substantial investment will help catalyze the creation of much-needed jobs in the region, attract other innovative companies, and strengthen the community.”

The primary question facing the Nautilus project is its location. Millinocket is a town of 4,500 residents in Central Maine that’s about a three-hour drive north of Portland. It is surrounded by forest, which was ideal for paper mills but far from the business districts that typically support data center demand. The Nautilus data center will connect to Maine’s “Three Ring Binder,” a broadband network created by the state to serve rural communities.

“On a map Millinocket seems remote, but it’s a short hop to Boston and markets in Canada,” said Connaughton. “We expect to be hosting major private and public enterprises from the state of Maine.”

Nautilus has several committed customers for the Millinocket data center, including the Maine State Chamber of Commerce and The Jackson Laboratory, a biomedical research center in Bar Harbor. Nautilus hopes to attract government customers and enterprise HPC users who can take advantage of Nautilus’ high-density cooling.

Nautilus has also had expressions of interest from cryptocurrency miners, who run high-density operations and are comfortable operating in rural areas.

With a first phase of 5 to 10 megawatts scheduled to come online in late 2022, Nautilus will quickly become the largest provider in the state. Maine currently has just fewer than five commercial data centers, primarily from local telecom companies.

Connaughton says Nautilus offers a timely prototype for bringing sustainable computing to new places. The company recently opened its first facility, a 7-megawatt data vessel on the San Joaquin River in Stockton, Calif. The multi-tenant colocation facility is now operating with a handful of customers.

The Nautilus design uses prefabricated data modules and a water-cooled rear-door cooling unit, a combination that offers exceptional energy efficiency. The company expects to deliver a PUE (Power Usage Effectiveness) of 1.15 or lower, a range typical of the largest hyperscale operators.

Although it began with a focus on data centers on barges, Nautilus expects to deploy future systems on both land and water. Its TRUE cooling system – short for Total Resource Usage Effectiveness – reflects the company’s belief that efficiency goes beyond power, and that water management is critically important for future data centers.

By using a rear door cooling unit, the company says it can support unusual density, allowing customers to get more data center capacity per square foot of real estate. Nautilus says its water cooling system can support workloads at up to 100 kilowatts a rack, compared to the current average of about 8 kW per rack. That enables new deployment footprints for high-performance computing (HPC) uses like AI, as well as applications for remote learning and other high-density applications.

The Millinocket site is one of seven Qualified Opportunity Zones in Penobscot County that provide federal tax advantages to attract investments into economically distressed communities. Opportunity zones offer tax breaks for projects in these areas, including the deferment and waiver of capital gains that are used to fund development.

“With the help of Nautilus, Maine is demonstrating that we can be a global leader in building pioneering digital technologies that will create jobs and strengthen our economy in an environmentally-sustainable way,” said Governor Janet Mills. “This significant investment and new facility mark another important step forward in the revitalization of the former mill site and are further proof that sustainable innovation can power long-term economic growth in rural Maine.”

“As the global economy continues to emphasize both the importance of digital infrastructure and the urgency of confronting climate change, sustainable projects like this are the blueprint for Maine’s future,” said U.S. Senator Angus King. “The new Nautilus facility is an important step to revitalize the regional economy, which will put Maine on the map as a leader in digital innovation, further our state’s longstanding commitment to environmentally-friendly industry, and create good jobs that strengthen our communities.”