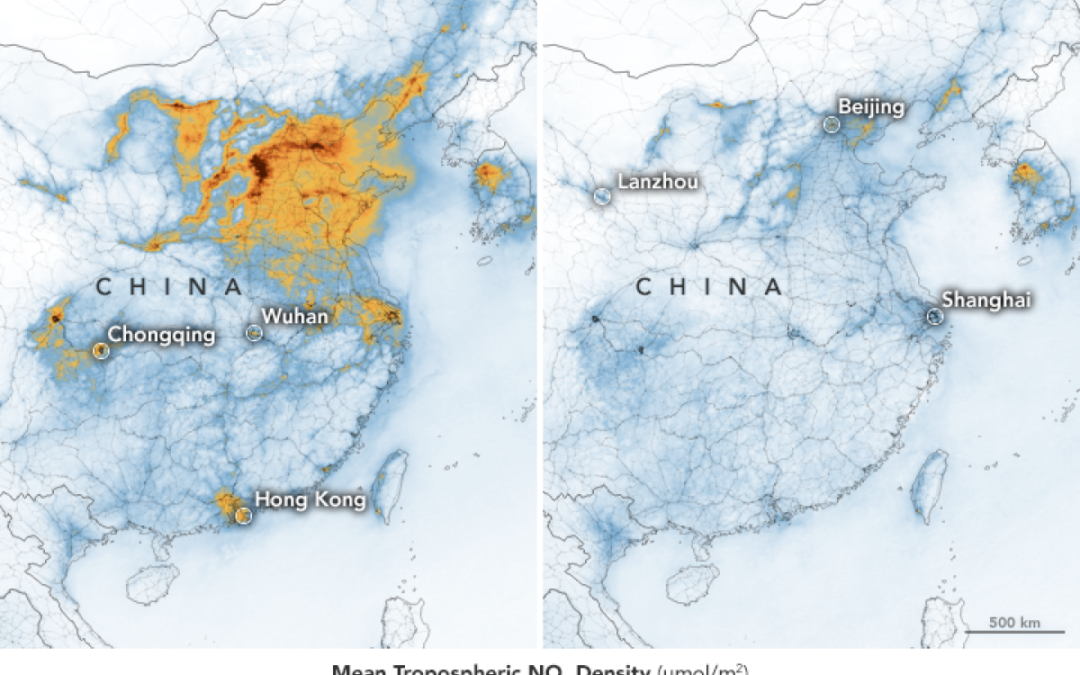 As sections of China’s workforce grind to a halt to combat the spread of the deadly coronavirus, it appears to be having a dramatic effect on the country’s notorious pollution levels. Satellite data has revealed “significant decreases” in nitrogen dioxide over the country, which NASA says is at least “partly related” to the slowdown in economic activity intended to contain the threat.

The data was gathered by NASA’s Aura and the ESA’s Tropospheric Monitoring Instrument satellites, which tracked concentrations of nitrogen dioxide over different parts of China since the beginning of the year, before and after they were quarantined.

Nitrogen dioxide is a byproduct of the burning of fossil fuels – be they coal, oil, gas or diesel – and can arise from cars, trucks, buses or power plants, along with other industrial facilities. In terms of hazards to human health and the planet, nitrogen dioxide pollution can cause respiratory problems such as asthma and infections, while it can mix with other chemicals in the atmosphere to produce acid rain and contamination in coastal waters.

“This is the first time I have seen such a dramatic drop-off over such a wide area for a specific event” says Fei Liu, air quality researcher at NASA’s Goddard Space Flight Center.

“This is the first time I have seen such a dramatic drop-off over such a wide area for a specific event,” said Fei Liu, an air quality researcher at NASA’s Goddard Space Flight Center.

This drastic reduction in nitrogen dioxide pollution started near Wuhan, as authorities began closing transportation in and out of the city, along with its business operations in an attempt to contain the virus. The reduction then spread as other quarantines were set up around the country and similar measures were implemented.

Another factor in all of this is the yearly reduction in nitrogen dioxide pollution that stems from China’s Lunar New year celebrations, during which a lot of businesses and factories close down from the last week of January to early February. Previous observations have revealed a decline in pollution, during this period, but the scientists say this year is different.

Looking at data from the Aura satellites’ OMI (Ozone Monitoring Instrument), which has mapped global data on nitrogen dioxide for more than 15 years, indicates that this year’s levels are significantly lower. The team arrived at this conclusion after comparing the 2020 data to the average levels measured at this time of year between 2005 and 2019, finding them to be between 10 to 30 percent less than what is usually recorded.

“There is always this general slowdown around this time of the year,” said Barry Lefer, an air quality scientist at NASA. “Our long-term OMI data allows us to see if these amounts are abnormal and why.”

“This year, the reduction rate is more significant than in past years and it has lasted longer,” says Liu. “I am not surprised because many cities nationwide have taken measures to minimize the spread of the virus.”