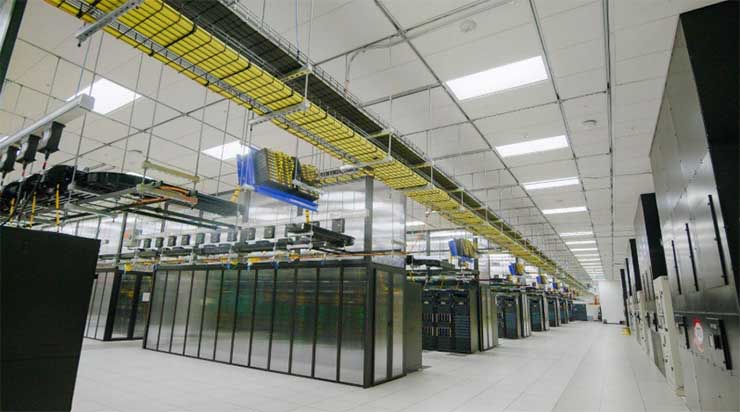 Meta’s vision of an immersive metaverse will require powerful hardware to process the artificial intelligence (AI) to create these digital worlds. The massive data centers that support the metaverse will feature lots of liquid cooling.

At today’s Open Compute Summit, Meta introduced a new AI computing platform, along with updates to its Open Rack and a roadmap for a gradual shift to a water-cooled AI infrastructure. The company plans to use cold plates to provide direct-to-chip cooling for AI workloads on its GPU servers, and is preparing several designs for managing the temperature of supply water as rack power densities increase.

“The power trend increases we are seeing, and the need for liquid cooling advances, are forcing us to think differently about all elements of our platform, rack and power, and data center design,” writes Alexis Bjorlin, Meta Vice President for Engineering, in a blog post accompanying her keynote today at the Summit in San Jose. “As we move into the next computing platform, the metaverse, the need for new open innovations to power AI becomes even clearer.”

In her keynote, Bjorlin unveiled several innovations that will advance Meta’s ambitions:

A New Phase for Meta’s Infrastructure

Today’s announcements at the OCP Summit mark the latest evolution in data center design for Meta, which operates more than 40 million square feet of data centers and says it has 47 data centers under construction across its global network.

Earlier this year Meta revealed a new facility to house its Research SuperCluster (RSC), will likely become the fastest AI system in the world when it is completed later this year. Much of the GPU-powered infrastructure in that system is air-cooled, but the facility’s InfiniBand network uses a liquid-to-liquid cooling distribution unit.

By embracing Air-Assisted Liquid Cooling (AALC), Meta will begin using cold plates to provide direct-to-chip liquid cooling within their existing data hall design, without the need to install a raised floor or piping to deliver water from outside cooling sources. AALC uses a closed-loop cooling system with a rear-door heat exchanger. The cool air from the existing room-level cooling passes through the rear door, cooling the hot water exiting the server. An RPU (Reservoir & Pumping Unit) pumping system housed in an adjacent rack keeps the water moving through the cold plates and heat exchanger.

Meta and Microsoft have been working together on prototypes for AALC that could support up to 40kW of power density, which they demonstrated at last year’s OCP Summit. Last fall an AALC rack design was introduced by Delta ICT, which develops OCP designs for hyperscale users.

A roadmap released with the blog post indicates that Meta plans to begin a shift to AALC, and expects to see power usage increase as its AI gear adds more power for high-bandwidth memory, which will prompt a shift to a “facility water” strategy as thermal loads exceed the limits of the rear-door heat exchanger. That next phase will likely require the addition of piping to bring chilled water to the rack.

Meta’s strategy allows it to add higher-density workloads within its current data centers, while working out the details of a next-generation design to transition to facility water supplies and the additional infrastructure that will require. Meta did not indicate when it is implementing the AALC design in production, how widely the design would be used in its infrastructure, or when it contemplates a shift to add facility water.

A virtual demo of Meta’s data center hardware is available at MetaInfraHardware.com, which offers the option of using a web interface or Meta Quest VR goggles for the tour, which provides a visual overview of the components of the AALC rack and how it works.

A key component in this roadmap is the Open Rack v3, which was unveiled at today’s event after years of development. The Open Rack v3 (ORV3) design accommodates multiple configurations for both power and cooling, providing a flexible building block for hyperscale deployments.

The Open Rack v3 is designed to bring 48V power to the equipment for higher efficiency, and a taller design that supports the addition of liquid cooling infrastructure.

Meta’s new Grand Teton AI hardware was showcased in today’s presentation by Bjorlin, who previously worked in the silicon operations at Broadcom and Intel.

“We’re excited to announce Grand Teton, our next-generation platform for AI at scale that we’ll contribute to the OCP community,” said Björlin. “As with other technologies, we’ve been diligently bringing AI platforms to the OCP community for many years and look forward to continued partnership.”

Grand Teton uses NVIDIA H100 Tensor Core GPUs to train and run AI models that are rapidly growing in their size and capabilities, requiring greater compute. The NVIDIA Hopper architecture, on which the H100 is based, includes a Transformer Engine to accelerate work on these neural networks, which are often called foundation models because they can address an expanding set of applications from natural language processing to healthcare, robotics and more.

“With Meta sharing the H100-powered Grand Teton platform, system builders around the world will soon have access to an open design for hyperscale data center compute infrastructure to supercharge AI across industries,” said Ian Buck, vice president of hyperscale and high performance computing at NVIDIA.

More details of the Meta OCP announcements are available at the Meta Engineering Blog.