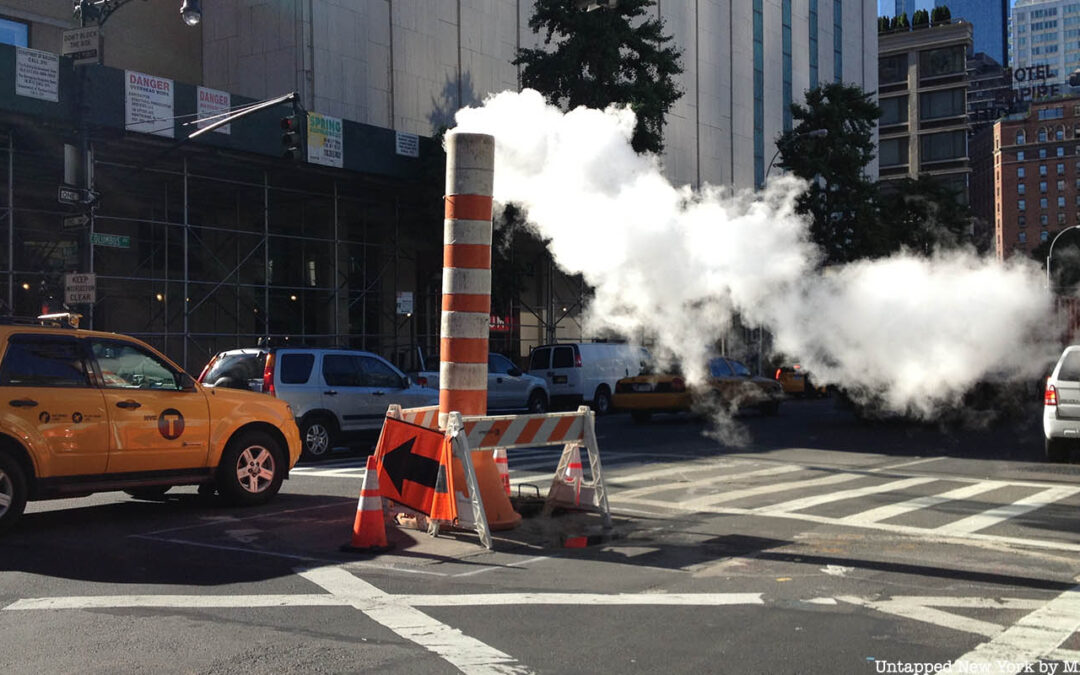 Our latest Untapped New York podcast episode is out, all about how the New York City steam system works. Have you ever wondered about those orange and white smokestacks you see in the middle of New York’s streets with steam flowing out of them? To find out more, we’ve gone straight to the source by interviewing Frank Cuomo, the general manager for steam operations at Con Edison. We also spoke with Mark Reigelman, an artist who used the steam system for one of our favorite guerrilla art installations ever.

Today, there are about 105 miles of steam pipes underneath New York City’s streets, which serve as a cleaner source of energy than oil or coal to over 1,500 buildings. Some of New York City’s most famous buildings are steam powered, including the Empire State Building, the Chrysler Building, Grand Central Terminal, the United Nations, Rockefeller Center and more.

The story of steam actually begins in Ancient Rome, where enterprising Romans were already building steam pipe systems for heating buildings and baths. The technology spread to the rest of Europe, but it was in the United States during the late 19th century. Inventors and businessmen turned it into a commercially viable heating option for towns and cities. New York was the first major city in the U.S. to have a steam system and still has the largest one to this day. In fact, if you add up the next five largest steam systems in America, it’s still smaller than New York City’s.

Frank Cuomo has been with the Con Edison steam operations for the past 11 years. Prior to Con Edison, he was a consulting engineer who designed building systems for heating, cooling and air conditioning. Cuomo tells us that this year marks the 139th birthday of the steam system in New York City, which was installed in March of 1882. Though New York City has the oldest and largest steam system in an American city, the technology actually started in Lockport, a town in northern New York north of Buffalo and east of Niagara Falls.

Cuomo explains that an inventor and engineer named Birdsill Holly discovered in 1877 that he could “generate steam in his basement to heat his home. When he tested some things out, and when he saw it was successful, he actually started heating his neighbors’ homes. And they started their own little distribution system in Lockport, New York…His invention got some of the investors and developers in New York City [interested], and they went to visit him. And one in particular, Wallace Andrews, took the idea and brought it to New York City.”

New York City was in the midst of the early skyscraper boom, and engineers were figuring out how to heat tall buildings. Andrews and others took the concept of district energy put forth by Holly and applied it to Manhattan. “Essentially the steam system was born in the Battery of Manhattan and continued to grow upwards all the way to today,” says Cuomo. Steam rises naturally, so it enabled buildings to get heated without using additional energy to get the heat to rise up.

New York City’s steam system starts in the Financial District, with the first steam plant located on the site of the current World Trade Center. It spreads north through Manhattan, and it goes on both sides of Central Park. On the west side, it extends all the way to 96th Street and on the east side, it extends to 89th Street. Although the system does not extend to Brooklyn, there is a co-generation plant at the Brooklyn Navy Yard from which Con Edison does buy steam. This then gets transported into the Manhattan steam grid through a pipe under the East River.

Steam, which represents just a small single-digit percentage of Con Edison’s revenue, is produced in various steam plants as well as in co-generation plants, located inside privately and publicly owned buildings and complexes like One Bryant Park. A co-generation plant uses just one fuel source and produces both electricity and steam, making it a very efficient mode of energy production. “ConEd steam service has the lowest carbon emissions intensity per unit of energy delivered compared to all other options available to the buildings of Manhattan,” says Cuomo, who explains that there has been increased interest in steam for environmental reasons in recent years.

Con Edison delivers steam at 450 to 475 degrees Fahrenheit, used for heating buildings and for hot water. Cuomo says, “so if you’re taking a shower or using a sink, the hot water that comes out of the tap in a lot of the buildings is actually heated by steam. Something a little bit more interesting, and it’s almost counterintuitive: We have about 250 buildings that use our steam to cool off in the summer.” To do so, the steam powers the compressor of a large steam chiller, which creates air conditioning and other means of cooling in a building. Steam is also used to power dry cleaners, sterilization in hospitals, and humidification in museums such as The Museum of Modern Art.

Besides being a cleaner form of energy, steam can also allow businesses such as hospitals to allocate traditional electric energy and add more MRI machines or live-saving equipment. It also requires far less equipment, so buildings that have limited basement space or value their basement space or want to reduce maintenance staff may opt for steam power.

Explaining how a steam plant works, Cuomo says that at a basic level, “We bring in water. We strip the water of any impurities. We want pure H20 as close as possible. Then that goes into either a boiler and one of our more traditional plants, or goes into our Co-Gen system… We add fuel (our fuel is 97% natural gas). We only use fuel oil in the dead of winter if there’s a natural gas shortage or emergency, otherwise we are natural gas all the time. That natural gas is burned, the water with pure H20 is heated, and it is heated to a certain pressure and temperature. It’s monitored very closely by our control center and all control rooms at each location. It is dispatched and released into the system. The system is a 105-mile long piping network interconnected grid so a customer can get steam from any one of our locations at any time. There’s no specific plant that services a specific section of the city, the grid is fully interconnected. So you can be getting steam from our East River station, or you can be getting steam for whatever other stations at any time of the day.”

Con Edison isn’t currently looking to extend the steam system but they are always looking to bring on more customers within the steam grid. In terms of maintenance, the only way to access the pipe system is by digging, like a lot of other utilities in New York City. Cuomo says, “There’s only one way to access it and it’s by digging. So if there’s a leak or something in the manhole, then most of the time we can get in there and just repair it in that manner. But most of the system is buried…manholes are more just access points for equipment.” A lot of the system is remote monitored however, and a control center keeps tabs on the system 24/7. Acquiring and applying new technology for monitoring and accessing the system is a top priority for Con Edison.

Finally, we spoke with Cuomo about these ubiquitous orange and white tubes. He says, “If you’re in Manhattan and you’re walking the streets in Manhattan, it’s pretty sure you’ve seen one of our famous orange and white stacks. So those are steam stacks. And the purpose of that is to direct a steam leak or vapor condition or some some condition that we have in the street away from both vehicle as well as follows pedestrian traffic, keep the steam away so cars can can drive and not be impeded by it. But also keep it away from pedestrians because it’s hot. The stacks are there most of the time, because we’ve identified the situation. It is controllable, it’s not a safety issue.”

On the future of steam and other energy options in New York City, Cuomo says the “Con Ed steam system has evolved from using coal to heavy fuel oil to natural gas. We’re really working to continue this effort of greening the system using renewable fuels or renewable technologies. We’re not 100% sure what the fuel of the future will be. But whatever it is, we’ll be buying a lot of it, and we’ll be using it to keep the city running.”

Finally, we asked Cuomo if he had heard of artist Mark Reigelman, our next guest on the podcast. Although the name did not ring a bell initially, the guerrilla installations Reigelman implemented using the steam system did. Reigelman created these wooden, quintessentially American houses he would put atop the steam vents around New York City, and the steam would come out of the chimneys, creating a moment of whimsey and absurdity in the concrete jungle. Laughing, Cuomo says, “Oh I’m very familiar with the house, yes. We chased those houses around for a few weeks.”

Reigelman’s project Smökers is one of our favorite art installations of all time. On the podcast episode, we speak to the artist about the hilarious way he went about installing it and some of his other works, including designing the playground at Domino Park. Humor and playfulness is key to Reigelman’s work, and he says, “Public art is a way to help act as a catalyst for [social] interaction. So with that said, I try to have my work explore the everyday in ways that are kind of playful and weird, and fun and absurd. Mostly because especially New Yorkers, they’ve seen so much of everything. I think [Smökers] is a great example to get people to re-see something they see all day every day. It’s a hard challenge and doing that in a way that resonates, is playful, kind of brings a smile to someone’s face, in something that kind of plants into their brain long term, is something that I find easiest done when humor and playfulness is injected in the mix in some way.”

As for using the steam system, Reigelman says it’s a no-brainer: “If you look at like literally any movie ever about New York, there are two things that make it New York: yellow cabs, and the steaming streets of New York City. It’s just such an important visual language in the city.”