How cities are going carbon neutral

Home to the majority of the global human population, urban areas make an outsized contribution to carbon emissions. What can they do to reach net zero by the middle of the century?

More than half of the world’s population currently live in cities, and by the middle of the century, 68% of all humans on the planet will live in urban areas. Yet already cities are responsible for 60% of our greenhouse gas emissions. As urban populations swell, so will their impact on the climate.

Cities are also among the places most likely to feel the acute impacts of climate change. The masses of concrete, metal and glass in urban areas can make them warmer than the surrounding landscape due to the way they absorb, emit and reflect heat. Water shortages and worsening air pollution threaten to make life in many cities unbearable.

But in response, 25 mega-cities have now pledged to become carbon neutral by 2050. These include Rio de Janeiro, New York, Paris, Oslo, Mexico City, Melbourne, London, Milan, Cape Town, Buenos Aires, Caracas, Copenhagen, and Vancouver. If the world hopes to meet its ambition of limiting global temperature increases to 1.5C by reaching net zero carbon emissions by the middle of the century, other cities will almost certainly have to do the same. So, what will our crowded, bustling metropolises have to do to become carbon neutral?

One of the biggest challenges facing cities are their carbon emissions from transport. Some cities are already trying to reduce these, along with other types of pollution from vehicles, by introducing ultra-Low Emission Zones (ULEZ).

In London, for example, the area covered by ULEZ has recently been expanded 18-fold from just the city centre, and it’s now the largest zone of its kind in Europe.

The aim is to encourage people to swap to lower-emission vehicles, but these still generate carbon emissions during the manufacturing process. To overcome this, some cities are encouraging people to shun cars altogether. Paris, for example, is creating 650km (400 miles) of new cycle ways and hopes to open up the whole of the city to bicycles by 2026 under a new plan announced by mayor Anne Hidalgo, while the Colombian capital, Bogota, has made 75 miles of streets car-free. 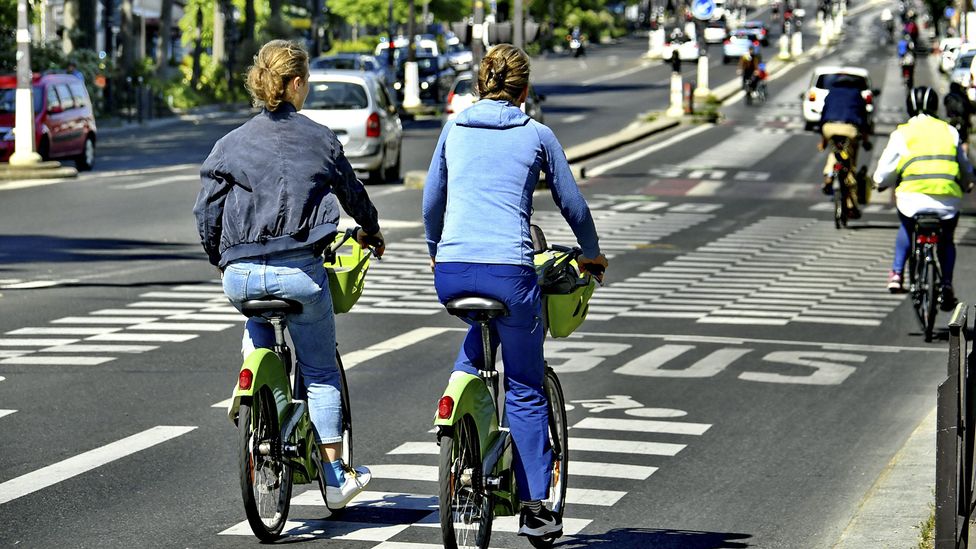 Cities such as Paris saw an increase in cycling during the pandemic, and are now extending the networks available to bikes (Credit: Karim Ait Adjedjou/Avenir Pictures/Alamy)

Researchers warn, however, that cultural changes such as getting people to cycle instead of drive can take a long time to realise. But the UN believes that policymakers can use the insight of behavioural science to nudge people in the right direction.

For example, helping to encourage people to cycle more by making it more accessible and easier for them to do so, or encouraging people to recycle by installing and improving access to recycling equipment.

Another major contributor to carbon dioxide (CO2) emissions in cities is the energy required to build, maintain and run buildings. In 2015, buildings were responsible for 38% of global energy-related CO2 emissions – with the majority produced after construction finishes.

To help reduce the emissions that come from heating, cooling and powering buildings, however, the construction industry has been making to efforts to incorporate more alternative energy sources into their design. The aim is to make buildings less reliant on fossil fuels.

Underground canals around the building suck in and heat incoming air in winter, and cool the system in summer with the help of probes extending 100m (330ft) underground, where the earth’s natural temperature can be used to cool or heat the air above.

This allows the building to use 75% less energy for heating and cooling than a standard office building.

Singapore is often hailed as a leader of sustainable development, but it is hugely dependant on air conditioning, which is installed in around 99% of the city’s private homes. Its building sector uses a building rating tool, Green Mark, to encourage sustainability by, for example, using energy-efficient air-conditioning. 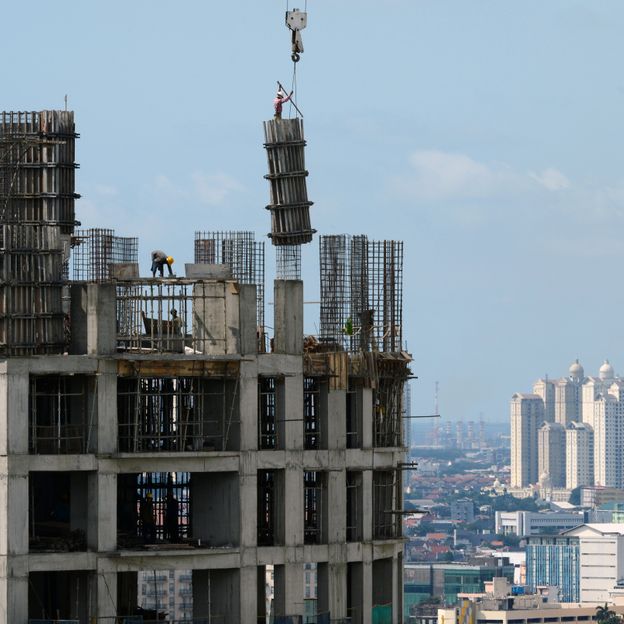 Concrete is one of the most commonly used building materials in the world but is a major source of carbon emissions (Credit: Romeo Gacad/Getty Images)

But before they’re even inhabited, buildings have a huge carbon footprint – 11% of energy-related carbon emissions are embodied within the construction and materials used.

Continuing to construct buildings from concrete and steel could mean emissions reach 600 million tons (544 million tonnes) a year by 2050. At the moment, steel and concrete already account for around 16% of global CO2 emissions.

But using wood instead could store up to 680 million tons (617 million tonnes) of carbon a year, according to research in Finland, since trees absorb CO2 from the atmosphere and using the wood for construction could then lock it away for decades.

Cities are also adopting nature-based solutions outside to help store carbon. Medellin in Colombia has planted 30 green corridors along 18 roads and 12 waterways, with 8,300 trees and 350,000 bushes. This has reduced the local temperature by more than 2C.

Medellin and other dense cities in hot climates can suffer from the urban head island effect, where hard materials absorb solar energy and pass it back into cities, says Benz Kotzen, associate professor at the University of Greenwich’s School of Design.

One way of tackling this introducing nature-based solutions, such as green roofs and living walls.

“Green infrastructure solves a lot of problems. It increases biodiversity, has a cooling effect from the evaporation of vegetation, and it can absorb some particulate pollution in the air,” says Kotzen.

Green infrastructure has been crucial in Singapore to lower the reliance on air conditioning, says Cheong Koon Hean, an architect and expert in urban planning at the Centre for Innovative Cities at Singapore University of Technology and Design. Until recently she was also the chair of Singpore’s Housing Development Board, helping to shape the city’s public housing.

Buildings in the city are being designed to maximise natural ventilation, says Koon Hean.

“Singapore is a very dense city, in a hot and humid climate,” she says. “And with population growth, we have a lot of high-rise buildings. And we’re facing increasingly warmer temperatures.”

At the Oasia hotel in Singapore, for example, a wall of greenery adorning the exterior helps to cool the building. The temperature of the façade measures 28C (82F), compared to the surface temperature of a building cladded with metal, which would be around 42C (107F).

But cities are only able to make use of their individual resources and climates. Many cities are using this to their advantage – for example, Copenhagen aims to build 360 wind turbines by 2025 to supply most of the electricity demand in the city, while Rio de Janeiro’s Museum of Tomorrow uses nearby water from Guanabara Bay to lower the indoor temperature.

But the changes required to reach net zero carbon require city authorities to balance countless systems and interests – and many operate beyond their control. 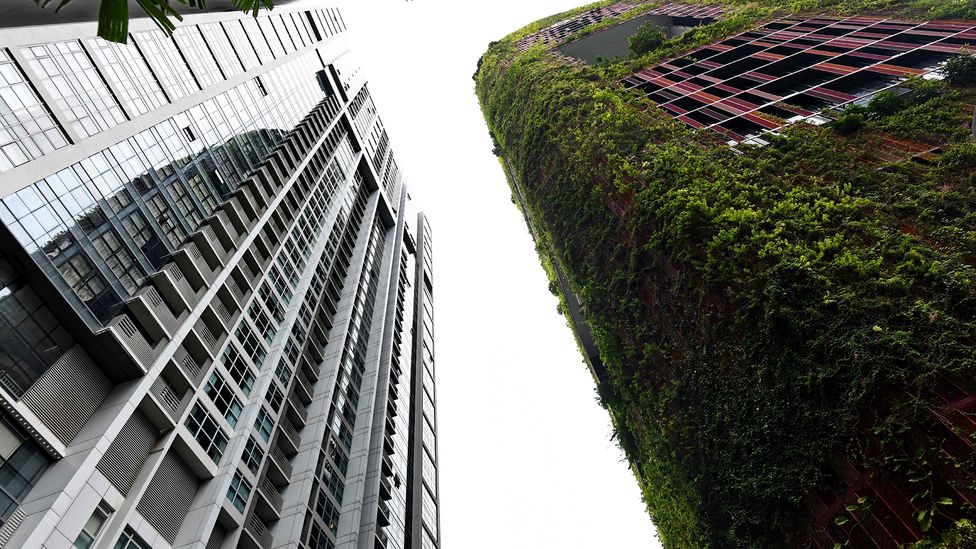 Architects and city planners in Singapore have tried to use plants on the outside of buildings to combat pollution and high temperatures (Credit: Roslan Rahman/Getty Images)

The relationship between the private and public sector on a city level needs to improve, says Stefan Knupfer, who leads sustainable practice for McKinsey.

“Cities like New York and Paris have very clear plans of how to go about sustainability. If you don’t have a plan, you won’t find private investors to invest in cities because investment needs predictability.”

Knupfer says it is important that cities focus on just a few areas needing improvement.

In 2017, he helped to analyse around 450 tools that were being used to make cities more sustainable, and defined 12 initiatives that cities should focus on to make the biggest difference. These include decarbonising the electricity grid, optimising energy efficiency in buildings, offering residents low-carbon transport options and improving how we manage waste.

Cities, he says, need to focus on initiatives with the shortest-term impact because time is running out to mitigate the worst effects of global warming.

“It’s important to work on what we know, not dreaming things up.”