Getting to Net Zero – and Even Net Negative – is Surprisingly Feasible, and Affordable 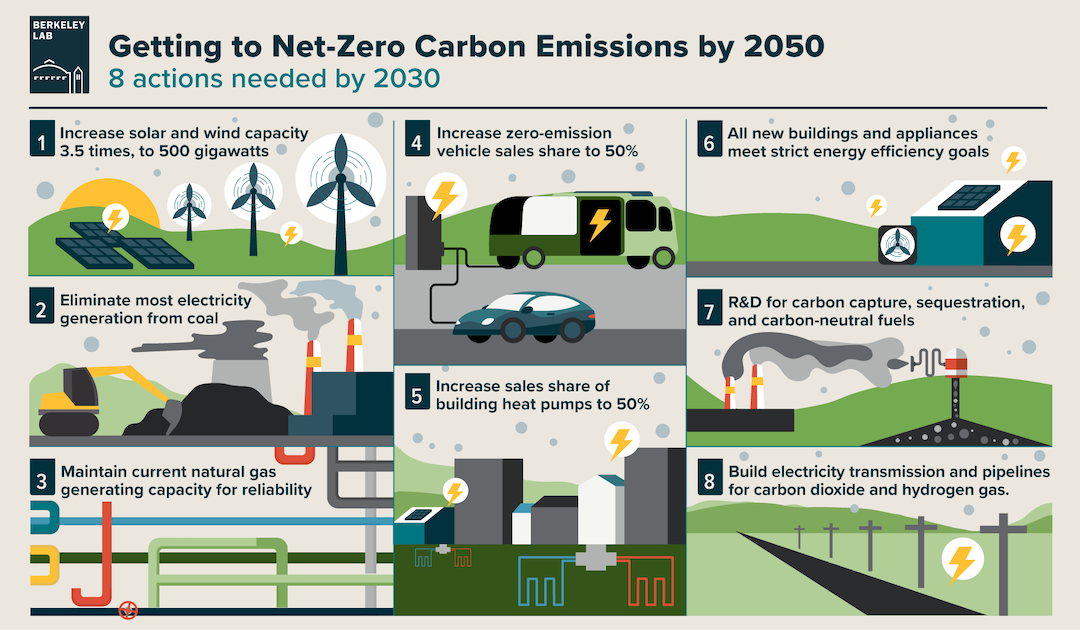 Regardless of the pathway we take to become carbon neutral by 2050, the actions needed in the next 10 years are the same.

New analysis provides detailed blueprint for the U.S. to become carbon neutral by 2050

Reaching zero net emissions of carbon dioxide from energy and industry by 2050 can be accomplished by rebuilding U.S. energy infrastructure to run primarily on renewable energy, at a net cost of about $1 per person per day, according to new research published by the Department of Energy’s Lawrence Berkeley National Laboratory (Berkeley Lab), the University of San Francisco (USF), and the consulting firm Evolved Energy Research.

The researchers created a detailed model of the entire U.S. energy and industrial system to produce the first detailed, peer-reviewed study of how to achieve carbon-neutrality by 2050. According to the Intergovernmental Panel on Climate Change (IPCC), the world must reach zero net CO2 emissions by mid-century in order to limit global warming to 1.5 degrees Celsius and avoid the most dangerous impacts of climate change.

“The decarbonization of the U.S. energy system is fundamentally an infrastructure transformation,” said Berkeley Lab senior scientist Margaret Torn, one of the study’s lead authors. “It means that by 2050 we need to build many gigawatts of wind and solar power plants, new transmission lines, a fleet of electric cars and light trucks, millions of heat pumps to replace conventional furnaces and water heaters, and more energy-efficient buildings – while continuing to research and innovate new technologies.”

In this transition, very little infrastructure would need “early retirement,” or replacement before the end of its economic life. “No one is asking consumers to switch out their brand-new car for an electric vehicle,” Torn said. “The point is that efficient, low-carbon technologies need to be used when it comes time to replace the current equipment.”

The pathways studied have net costs ranging from 0.2% to 1.2% of GDP, with higher costs resulting from certain tradeoffs, such as limiting the amount of land given to solar and wind farms. In the lowest-cost pathways, about 90% of electricity generation comes from wind and solar. One scenario showed that the U.S. can meet all its energy needs with 100% renewable energy (solar, wind, and bioenergy), but it would cost more and require greater land use.

In the least-cost scenario to achieve net zero emissions of CO2 by 2050, wind, solar, and battery storage capacity will have to increase several-fold (left chart). Vehicles will need to be mostly electric, powered either by batteries or fuel cells (middle charts). Residential space and water heaters will also need to be electrified, powered either by heat pumps or electric heaters (right charts). (Photo Credit: Williams, et al., 2021)

“We were pleasantly surprised that the cost of the transformation is lower now than in similar studies we did five years ago, even though this achieves much more ambitious carbon reduction,” said Torn. “The main reason is that the cost of wind and solar power and batteries for electric vehicles have declined faster than expected.”

The scenarios were generated using new energy models complete with details of both energy consumption and production – such as the entire U.S. building stock, vehicle fleet, power plants, and more – for 16 geographic regions in the U.S. Costs were calculated using projections for fossil fuel and renewable energy prices from DOE Annual Energy Outlook and the NREL Annual Technology Baseline report.

The cost figures would be lower still if they included the economic and climate benefits of decarbonizing our energy systems. For example, less reliance on oil will mean less money spent on oil and less economic uncertainty due to oil price fluctuations. Climate benefits include the avoided impacts of climate change, such as extreme droughts and hurricanes, avoided air and water pollution from fossil fuel combustion, and improved public health.

The economic costs of the scenarios are almost exclusively capital costs from building new infrastructure. But Torn points out there is an economic upside to that spending: “All that infrastructure build equates to jobs, and potentially jobs in the U.S., as opposed to sending money overseas to buy oil from other countries. There’s no question that there will need to be a well-thought-out economic transition strategy for fossil fuel-based industries and communities, but there’s also no question that there are a lot of jobs in building a low-carbon economy.”

An important finding of this study is that the actions required in the next 10 years are similar regardless of long-term differences between pathways. In the near term, we need to increase generation and transmission of renewable energy, make sure all new infrastructure, such as cars and buildings, are low carbon, and maintain current natural gas capacity for now for reliability.

“This is a very important finding. We don’t need to have a big battle now over questions like the near-term construction of nuclear power plants, because new nuclear is not required in the next ten years to be on a net-zero emissions path. Instead we should make policy to drive the steps that we know are required now, while accelerating R&D and further developing our options for the choices we must make starting in the 2030s,” said study lead author Jim Williams, associate professor of Energy Systems Management at USF and a Berkeley Lab affiliate scientist.

Another important achievement of this study is that it’s the first published work to give a detailed roadmap of how the U.S. energy and industrial system can become a source of negative CO2 emissions by mid-century, meaning more carbon dioxide is taken out of the atmosphere than added.

According to the study, with higher levels of carbon capture, biofuels, and electric fuels, the U.S. energy and industrial system could be “net negative” to the tune of 500 million metric tons of CO2 removed from the atmosphere each year. (This would require more electricity generation, land use, and interstate transmission to achieve.) The authors calculated the cost of this net negative pathway to be 0.6% of GDP – only slightly higher than the main carbon-neutral pathway cost of 0.4% of GDP. “This is affordable to society just on energy grounds alone,” Williams said.

When combined with increasing CO2 uptake by the land, mainly by changing agricultural and forest management practices, the researchers calculated that the net negative emissions scenario would put the U.S. on track with a global trajectory to reduce atmospheric CO2 concentrations to 350 parts per million (ppm) at some distance in the future. The 350 ppm endpoint of this global trajectory has been described by many scientists as what would be needed to stabilize the climate at levels similar to pre-industrial times.

The study was supported in part by the Sustainable Development Solutions Network, an initiative of the United Nations.