Downtown Denver Has Warmed Itself With Steam Since 1880. Could That History Soon End? 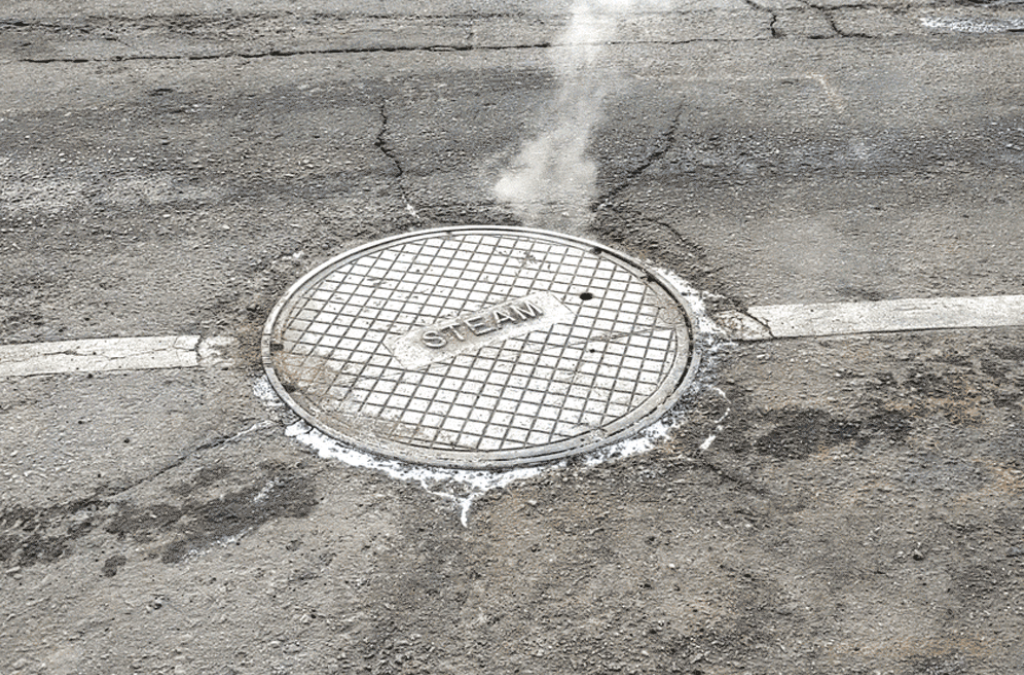 Each winter, the streets of Downtown Denver breathe steam. Plumes rise from grates and manholes, sometimes thick enough to obscure cars or pedestrians.

Fifth-grader Catalina DeHerrera, who attends school near one of these manholes, had no clue where all the steam came from. When her 3-year-old brother asked for an explanation, she dutifully made something up.

“They are making clouds for the city so there will be clouds in the sky,” she told him.

Denver doesn’t operate an underground cloud factory, unfortunately. The real source is a 10-mile network of pipes snaking beneath the streets. The hot water vapor is delivered to about 120 customers in Downtown Denver, feeding laundry machines and even cleaning coins at the Denver U.S. Mint.

The main purpose though is to heat buildings.

So why does the system make steamy, dreamy street clouds? Sometimes it vents to avoid the buildup of condensation. In other cases, water that drips down from the streets vaporizes upon reaching the pipes.

Either way, the plumes may not be around for much longer. Recent rate increases have led customers to re-evaluate the steam system. At the same time, the City of Denver has taken an interest in electric heat for commercial buildings as it confronts the climate crisis.

Those dual forces could eventually doom a unique service.

Neighborhood-sized steam heat systems exist in many U.S. cities, including New York and San Francisco. The system in Denver stands out because it’s been churning away since 1880. According to the International District Energy Association, the city contains the oldest continually operated commercial steam heat system in the country.

“We’ve invested in it and upgraded it, so it’s definitely not old,” he said.

The latest updates came after Xcel retired the Zuni Generating Station near the Denver Broncos’ football stadium. For decades, steam initially used in turbines to make electricity was repurposed and fed into the network. In 2015, Xcel stopped generating power at the station but kept a 70-year-old unit running just to create steam.

In early 2019, Xcel replaced the aging unit by adding a third boiler. The squat metal building sits just north of Union Station in the LoDo neighborhood. Inside, the new, shiny boiler towers about a story-and-half tall. A peephole on its side reveals a massive natural gas-fed flame.

To recover costs for the improvements, Xcel turned to its steam customers. The utility asked state regulators in January to hike its average monthly steam heat bill by about 39 percent. The sticker shock led customers to challenge the rates before Colorado’s Public Utility Commission. After a settlement agreement, the increase shook out to about 36 percent.

Without the rate hike, Davis said the utility simply couldn’t continue to offer steam as a heating option.

“We could easily say, ‘Oh, we’re not going to provide that service to you anymore, figure something else out,’” he said. “I don’t think that’s the way you want to talk to a customer.”

Even before the latest rate increase, steam heat was losing popularity. According to Xcel, the total number of customers declined by about 10 percent over the last decade, from 136 in 2009 to 122 this year.

Joe Havey, CEO of Denver energy consulting firm E Cube, said the rate increases could trigger a much larger exodus. Over the last nine months, the former building operator said he’s received an “inordinate” number of phone calls from steam customers wondering if they should disconnect from the service.

He expects the trend could force Xcel to decommission the system in the next 10 or 20 years.

“Buildings will leave the steam system,” Havey said, “convert to either gas heat or electric heat, and then Xcel will be left with fewer and fewer customers to charge their customers so the rates will keep going higher.”

Jonathan Rogers, a renewable energy specialist with the City of Denver, also sees challenges for the natural-gas-powered steam system. Mayor Michael Hancock has pledged the city to run on 100 percent renewable energy by 2030. The goal is just one piece of the city’s ambitious climate plan, which calls also calls for a 45 percent reduction in commercial building energy use over the next decade.

To get there, Rogers sees particular promise in electric heating.

“Electrification seems like a really valuable near-term option for us,” he said. “It’s exciting because it removes point-source carbon emissions. And as we’re getting more and more renewables…to avoid those emissions altogether.” In other words, electric heaters, unlike fossil fuel alternatives, at worst displace pollution to power plants. At best, they can rely on wind and solar.

Rogers plans to wait until 2022 before saying if steam fits with Denver’s climate goals. That’s when Xcel must finish an engineering study of the system ordered under the same settlement agreement over the rate hike.

Some think an end to steam in Denver could be a mistake for the city — and the climate.

Rob Thornton leads the International District Energy Association, which advocates for neighborhood-sized energy systems around the world. To argue for a future to the steam system, he points to its past.

“Cities turned this to district energy really as an environmental strategy,” he said. “By centralizing the production, it gave them better control over emissions and eliminated hundreds of coal-fired boilers dotted around the city.”

In fact, Denver learned a tough lesson about the dangers of on-site heating in 1895, when a coal-fired boiler blew up the Gumry Hotel and killed 22 people. The steam heat system offered buildings a safer alternative.

Today, the United Nations Environment Program has called district energy a “secret weapon” for the environment. Heating or cooling an entire neighborhood allows for easier regulation, efficiencies of scale and a capacity to quickly switch to new energy sources. The gold-standard is Copenhagen, which heats 98 percent of its buildings with a combination of excess heat from power plants and trash incineration.

Construction of another innovative district energy system is underway in Denver. The National Western Center, set to open in 2024, will operate a system fed by excess heat recovered from sewer lines.

Before it walks away from its historic steam system, Thornton said the city and Xcel should consider whether it’s a relic in an era imperiled by climate change — or an asset.

“I don’t mean to be like just a total pitch man here,” Thornton said. “I think the Denver system — with the proper focus and attention — could continue to be of value to the customers and the city overall.”