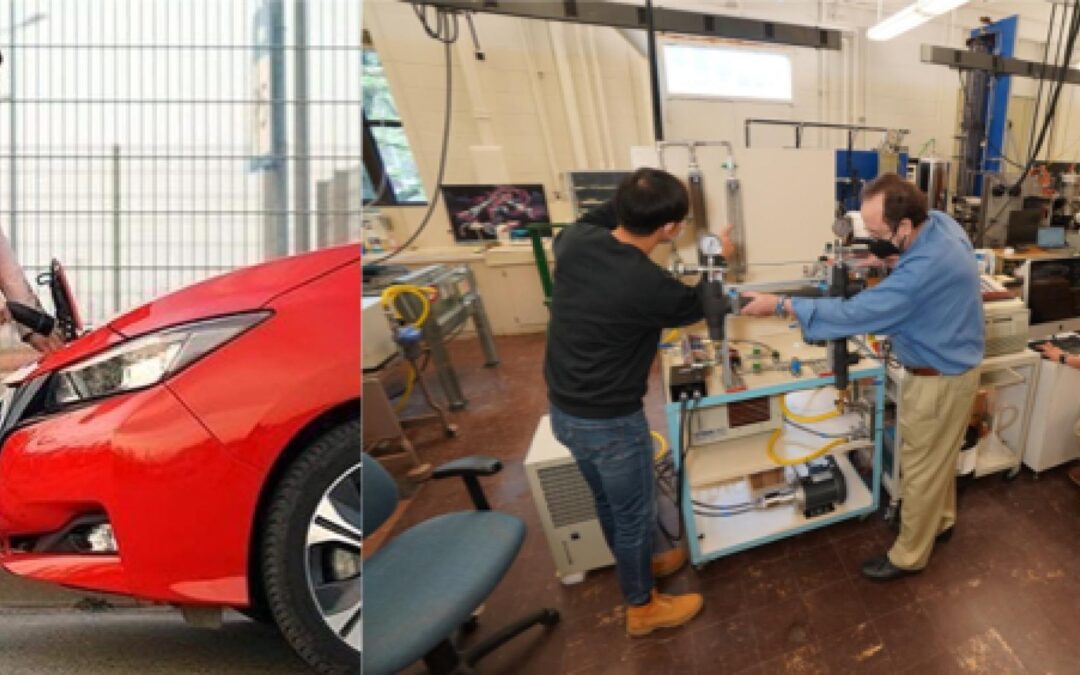 A team sponsored by NASA’s Biological and Physical Sciences Division is developing a new technology that will not only achieve orders-of-magnitude improvement in heat transfer to enable these systems to maintain proper temperatures in space, but will also enable significant reductions in size and weight of the hardware. What’s more, this same technology may make owning an electric-powered car here on Earth easier and more feasible.

A team led by led by Issam Mudawar, Purdue University’s Betty Ruth and Milton B. Hollander Family Professor of Mechanical Engineering, has developed the Flow Boiling and Condensation Experiment (FBCE) to enable two-phase fluid flow and heat transfer experiments to be conducted in the long-duration microgravity environment on the International Space Station.

The FCBE’s Flow Boiling Module includes heat-generating devices mounted along the walls of a flow channel into which coolant is supplied in liquid state. As these devices heat up, the temperature of the liquid in the channel increases, and eventually the liquid adjacent to the walls starts to boil. The boiling liquid forms small bubbles at the walls that depart from the walls at high frequency, constantly drawing liquid from the inner region of the channel toward the channel walls (see figure below). This process efficiently transfers heat by taking advantage of both the liquid’s lower temperature and the ensuing change of phase from liquid to vapor. This process is greatly ameliorated when the liquid supplied to the channel is in a subcooled state (i.e., well below the boiling point). This new “subcooled flow boiling” technique results in greatly improved heat transfer effectiveness compared to other approaches and could be used to control the temperatures of future systems in space.

FBCE was tested and delivered to the Station in August 2021 and began providing microgravity flow boiling data in early 2022. Results from these FBCE experiments will enable the design of future space systems that require temperature control, but this technology also has applications on Earth—specifically, it could make owning an electric car more appealing.

Before electric cars can become widely used, certain challenges must be overcome. First, a network of charging stations must be deployed along highways and roads to enable charging of electric vehicles. Second, the time required to charge a vehicle must be reduced. Currently, charging times vary widely, from 20 minutes at a station alongside a roadway to hours using an at-home charging station. Lengthy charging times and charger location are both cited as major concerns of people who are considering electric vehicle ownership.

An electric vehicle charging system contains a charging cable ending with a plug that is inserted into the vehicle’s charging inlet. The electrical current supplied through the charging cable is delivered to the battery inside to the vehicle, which powers the vehicle’s electric motor. The passage of electrical current through any conductor results in a finite amount of heat generation, and the higher the current, the greater the heat generated. A charging station conductor typically consists of a bundle of wires and due to temperature limits, charging cables for conventional, 350-ampere, “fast charging” systems require sizable conductors, rendering the charging cable quite heavy and inconvenient for customers to maneuver. The cable weight is also increased by the large charging connector and liquid coolant passing through the cable to remove the heat.

Reducing the charging time for electric vehicles to five minutes (an industry goal) will require charging systems to provide current at 1,400 amperes. Currently, advanced chargers only deliver currents up to 520 amperes, and most chargers available to consumers support currents of less than 150 amperes. Charging systems providing 1,400 amperes will generate significantly more heat than current systems, however, and will require improved methods to control temperature.

Recently, Mudawar’s team applied the “subcooled flow boiling” principles learned from the NASA FBCE experiments to the electric vehicle charging process. Using this new technology, dielectric (non-electrically conducting) liquid coolant is pumped through the charging cable, where it captures the heat generated by the current-carrying conductor. Subcooled flow boiling allows Mudawar’s team to deliver 4.6 times the current of the fastest available electric vehicle chargers on the market today by removing up to 24.22 kilowatts of heat. Purdue’s charging cable can provide 2,400 amperes, which is far beyond the 1,400 amperes required to reduce time required to charge an electric car to five minutes. Application of this new technology resulted in unprecedented reduction of the time required to charge a vehicle and may remove one of the key barriers to worldwide adoption of electric vehicles.