The massive data centers that power services from Google, Facebook, IBM and other tech giants are big-time energy hogs. But researchers around the world are starting to turn them into an energy source.

Data centers are large facilities filled with servers and other equipment. In the United States, data centers are responsible for more than 2% of the country’s electricity usage,according to researchers at Villanova University. If the global cloud computing industry were considered to be a single country, it would be the fifth-largest in the world in terms of energy consumption, according to Ed Turkel of Hewlett-Packard’s (HPQ, Fortune 500)Hyperscale Business Unit.

Nearly half of the energy data centers consume goes to cooling the equipment using fans and other methods. That’s “just wasteful,” said Jill Simmons, director of Seattle’s Office of Sustainability and Environment.

That’s why the city of Seattle is working on a project to make use of the heat data centers produce. The city plans to route heat from two local data centers to to help warm 10 million square feet of building space in the surrounding area. The project is still in the conceptual phase, but Simmons said the city hopes to have it in motion “within the next year.”

The plan is to take the water that cools the data center and pipe it out to buildings nearby. The system will also rely on water heated by energy from sewer lines and electrical substations. 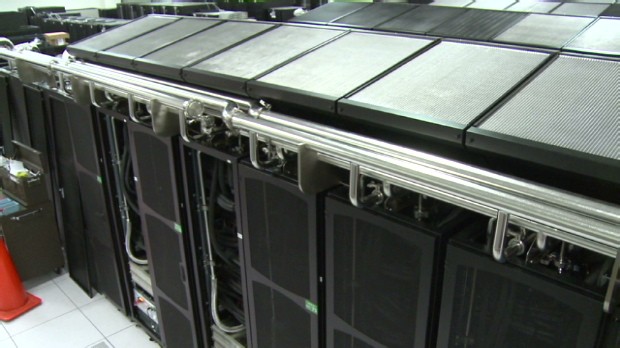 The construction cost will be borne by private utility Corix, which will recover its investment through rates paid by customers over a 30-year period.

“Our hope is that the rates will be competitive with the rates of other utilities, and hopefully better over time,” said Christie Baumel, energy policy advisor at Seattle’s Office of Sustainability and Environment.

Seattle is following the lead of other cities around the world, including Munich and Vancouver, small portions of which also use heat from data centers.

The challenge in implementing these systems is that they’re expensive to install, and need to be located near the facilities that will use the heat. Tech companies often choose remote areas with cheaper real estate and energy costs for their data centers, however.

Researchers from Microsoft (MSFT, Fortune 500) and the University of Virginia have proposed an ambitious solution: bringing cloud computing to your home.

The team envisions small servers they call “data furnaces” being installed directly at homes and office buildings. This solution, they say, would offer increased computing power to users along with a smaller carbon footprint. In addition, if the servers are connected to home or office furnace systems, they could serve as the primary heating source.

For now, the “data furnace” system is just a thought experiment, but it addresses a conundrum that will be increasingly pressing for tech companies as cloud infrastructure needs grow.

“Energy efficiency is not only important to reduce operational costs, but is also a matter of social responsibility for the entire IT industry,” the researchers wrote.