As electricity costs rise, market for heat pumps takes off

Thomas Simon has been trying to cut back on fossil fuels. He weatherized his home and added a wood stove. But in the dead of a Vermont winter, Simon still had to rely on an oil burner to get through those cold nights and days.

But now he has found something that suits his environmental beliefs and is much easier on his household budget: heat pumps.

Once an expensive add-on that did not work well in cold climates like New England’s, heat pumps have gotten a technological makeover. The new generation of machines can keep a backwoods home warm even in extreme conditions — some to as low as 20 degrees below zero. And though they are powered by electricity, which is usually a very expensive way to heat a home, the new heat pumps are so efficient that they cost much less to run than a conventional oil heat system.

“We’re estimating that this should save us about $1,200 a year,” Simon said as workmen were preparing to install three cold-climate heat pumps at his home in Putney. “The electric will be higher, but the savings over oil should be significant.”

The new heat pumps work so well that environmental groups are pushing them as a high-efficiency supplement to or replacement for oil-burning systems and conventional electric heaters. Many utility companies offer rebates to help soften the installation costs.

Indeed, sales have been climbing steadily over the past few years since manufacturers have improved the various components — including refrigerants, compressors, and heating coils — that deliver heat from an outdoor pump.

They’re becoming especially popular in rural parts of New England, such as the Berkshires, where many homes live well off the networks of pipelines that deliver low-cost natural gas for heating.

Indeed, Massachusetts and Vermont each have programs that help consumers switch to heat pumps. 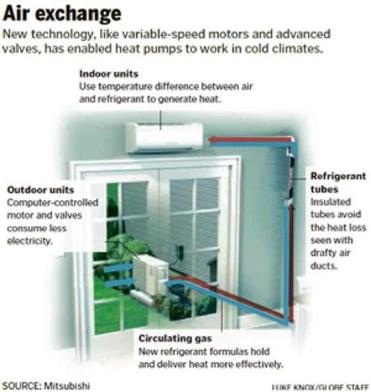 “A lot of people are familiar with air-sourced heat pumps as a technology that’s often used in the South, where they don’t get temperatures below freezing,” said Peter McPhee, who is leading a study of heat pumps for the Massachusetts Clean Energy Center. With “a few tweaks” to those old models, McPhee said, some manufacturers have made heat pumps that can stand up to the coldest weather New England has to offer and still operate at peak efficiency.

One big improvement that has allowed heat pumps to function in cold climates is the introduction of variable-speed motors. These save energy by running more slowly — but not shutting off — when the house is at a comfortable temperature.

“A lot of older equipment is either on or off,” McPhee said. “It would be like driving a car by either flooring it or putting it in idle. It makes it less efficient.”

Today the electronics are more sophisticated, and manufacturers have reworked the mix of circulating gases, or refrigerants, to make them better at transferring heat inside. And insulated tubes have replaced many a drafty system of ducts.

The most popular residential heat pump, called a mini-split, consists of wall-mounted indoor venting system connected to an exterior unit that looks like a small central air unit turned on its side. The basic technology uses differences in air temperatures to move heat into a home during winter and remove it during hot weather.

A mini-split system does not have vents or ducts that can lose heat along the way. The indoor and outdoor units are connected by refrigerant-circulating tubes that are fed through small holes in the wall.

Mini-splits cost between $3,000 and $4,500 but the price can be much less, depending on the rebate available from the local utility.

Simon, the Vermont homeowner, had three put into his house and paid $12,800, including installation.

The new generation of cold-climate heat pumps could cut energy costs drastically. Cold-climate pumps generate two to three times as much heat as an electric boiler or a baseboard heater, using the same amount of electricity. That could mean huge savings for the 10 percent of Massachusetts residents who still use electric systems to heat their homes — especially this winter, because electricity prices are expected to be at their highest level in decades.

The savings over oil heat are substantial — as much as 40 percent for residents of the Northeast, according to a 2013 report from the Rocky Mountain Institute, a Colorado think tank that focuses on energy.

In Massachusetts, some 30 percent of residents heat their homes with oil, while in Maine, 70 percent are still burning oil.

“Putting in one or two mini-splits can really make a big difference,” said Bruce Harley, technical director of Conservation Services Group, one of the state’s largest energy-efficiency companies.

Home heating specialists caution that not all new heat pumps can easily replace a fossil-fuel system; some models are rated to work only as low as 5 degrees, meaning they emit less heat in extremely cold weather.

Heating technicians warn that most homeowners could not rely on a few mini-splits as their only heat source unless their home was well-insulated.

“On really cold nights, there may not be enough heat,” said Dave Brunell, whose Worcester company, Pioneer Oil, does heating and cooling work.

Heat pumps aren’t necessarily the most cost-effective option for all consumers, either. Before deciding on a heat pump, a consumer should request a home energy audit, which groups like Mass Save will do for free, Harley said.

Contractors said that demand for the systems has risen swiftly in recent years, because many homeowners are drawn to them as a combined heating and cooling system. On hot days, a heat pump’s flow can be reversed to suck heat from inside and dump it outside. On newer systems, all it takes is the push of a button.

Joseph Fernandez, a vice president at the construction supply chain F.W. Webb, estimated that sales of heat pumps have risen 30 percent in the past two years.

“More and more homeowners are going away from oil and converting to this ductless technology,” Fernandez sid.